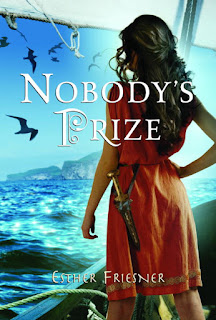 Helen returns for more adventure in this enjoyable sequel. Determined not to let her gender keep her from the action, Helen disguises herself as a boy and sets sail on the Argo. Of course, she can ignore her womanhood all she wants but the world won’t do the same. Her friend Milo and her brothers still want to protect her. There’s also all the romantic attention she receives by anyone who figures out she’s a woman, not to mention Helen’s own unexpected crushes.

These books feature the kind of skilled, unobtrusive writing that fades against the page and lets the reader focus exclusively on the story.

For anyone still not clear, the Helen I mentioned is Helen of Troy. I adore Friesner’s portrayal of this iconic figure. Helen is no damsel in distress. If she cannot escape a bad situation, you can trust that it’s not for lack of trying. She is clever and determined. These books take place before her beauty started a war and it’s clear from comments that she’s still growing into her beauty: a gangly ugly duckling slowly transforming into a swan. She doesn’t yet see herself as beautiful, but what she does know is that when men perceive her as beautiful it seems to be more trouble than it’s worth.

The book ends before the more familiar part of Helen’s story, but I can’t help hoping the author will return to tell more. I’m a sucker for women who refuse to climb into the box society has prepared for them.
Posted by Rachel Hanley at 7:00 AM No comments: 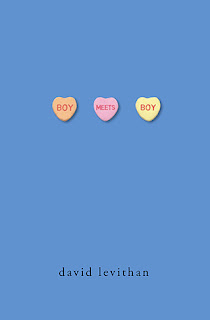 Most of us are familiar with the classic boy meets girl storyline: Boy meets girl. Boy loses girl. Boy wins girl back. That’s exactly what the title of BOY MEETS BOY promises...with one obvious distinction.

Paul attends a high school like none I’ve ever known, though I (and probably many others) wish this had been my high school. The campus is populated with dynamic characters. Take Infinite Darlene as one example, previously known as Daryl before she realized she likes strutting around in heels and false eyelashes just as much as she loves playing quarterback on the football team.

For our narrator Paul being gay has never been more than another part of his identity. Not a revelation, not a struggle. Of course, the same can’t be said for everyone. One of his gay friends Tony has religious parents determined to fix him. Then there’s Paul’s ex-boyfriend Kyle who, after what seemed a sincere romance, spread rumors that Paul somehow tricked him into liking guys.

In other complications, Paul feels he’s losing his best friend of forever, Joni, to a new relationship. He watches the person he loved being swallowed by someone else’s wants and feels powerless to stop it.

All that fades away when Paul meets Noah, the boy who seems different from any other boy. Uniquely and perfectly special. As our established storyline warns us, however, Paul’s about to make some dumb mistakes.

I have heard frequent criticism of this book that it isn’t revolutionary enough, that it’s merely the same old formula but with two boys instead of a boy and girl. Exactly! I think. Count up the number of boy meets girl stories for a ratio and you see we still need many, many more boy meets boy stories. Not to mention that it’s counterproductive to hold queer fiction to some higher bar where every book needs to blow your mind in a way not expected from romances between a girl and a boy.

Besides, I do think BOY MEETS BOY has potential for mind-blowing. The characters are so wonderfully quirky and nuanced and yet so believable. The high school seems like a “different” kid’s dream where everyone can “come out” as themselves with all their eccentricities worn on their sleeves. After all, the details make the story and the details here certainly make this book memorable.
Posted by Rachel Hanley at 7:00 AM No comments: 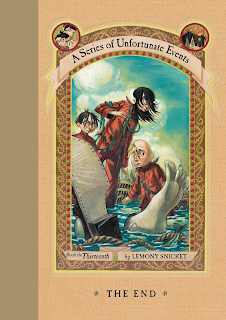 In the final book in the lengthy SERIES OF UNFORTUNATE EVENTS saga, the Baudelaire orphans find themselves shipwrecked on a strange island with their nemesis Count Olaf.

I’ll address the end first, because with the final book in a series this long the end is what affects the reader most. The end of THE END is neither satisfying nor unsatisfying. The author finds a good closure point for a tale that clearly continues. However, as I expected the closer we came to the end, many plot threads remain unresolved. That said, this has always been a strange, mysterious series for which it seems fitting that there remain things we never know.

In some ways the story gets even darker in this last book. However, the author also makes efforts to humanize the villain Olaf in the last few books, humanize without excusing any terrible actions.

This installment also continued the trend I disliked of having some incredibly long paragraphs - as in stretching across pages without a break long paragraphs. While it adds to the sense of a rambling narrator, this formatting takes the joke too far for me and just becomes frustrating for the eyes.

This whole middle reader series is a fun, quirky tale about being a good person even when the world isn’t being good to you.
Posted by Rachel Hanley at 7:00 AM No comments:

THE NATURAL HISTORY OF UNICORNS 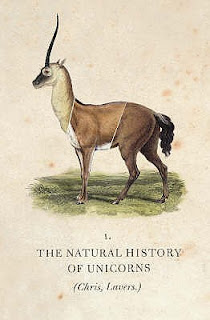 Review of THE NATURAL HISTORY OF UNICORNS by CHRIS LAVERS

This exploration of the legendary unicorn delves into historic records of unicorns and likely explanations for the creature’s mythical evolution across centuries. This in-depth analysis explores several cultures not to mention dozens of animals that all possibly contributed to the unicorn mythology.

To anyone already well-informed on their unicorns, I don’t think there’s much new here. The book can also feel a little technically dense with quotes from old writings about unicorns as well as detailed descriptions of animal species. The speculation becomes somewhat repetitive, too. In short, the theory is that different cultures borrowed aspects of real animals and pieced together this famous creature, which then developed further over time as the stories took on a life of their own.

That all said, if you care about the subject matter then this is still an interesting read. For one thing, I learned about a lot of species about which I had never heard before. I also found myself intrigued separating out where certain beliefs originated, be they secular or religious originally as well as geographical origins.

This is a detailed scholarly examination of an iconic creature and the truth behind the fantasy.
Posted by Rachel Hanley at 7:00 AM No comments: