I wanted to give my loyal readers a heads up that I will be discontinuing my blog.

I have enjoyed the past ten years of reviews, but I want to dedicate more time to my own writing and pursuing publication of my novels.

I will keep my blog up for the rest of November, but sometime in December or January it will go offline for a while and then re-emerge as a slightly redesigned author website.

Thank you to everyone who has read some or all of my many reviews, especially those of you who have taken the time to comment or reach out to me. Happy reading, everyone!

Posted by Rachel Hanley at 6:51 PM No comments:

PRINCESS OF THE WILD SWANS 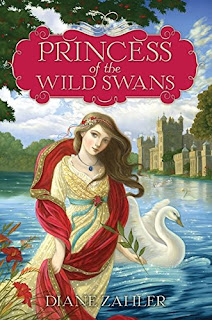 Review of PRINCESS OF THE WILD SWANS by DIANE ZAHLER

Princess Meriel isn’t all too pleased when her father returns from a trip with a brand-new stepmother. The woman doesn’t seem that friendly and balks when introduced to Meriel’s brothers, snapping at Meriel’s father that he only mentioned the daughter, not all these sons. What a terrible coincidence then when Meriel’s brothers promptly go missing. It doesn’t take Meriel long to sort out that her stepmother is a powerful sorceress with some kind of nefarious agenda and Meriel’s brothers have been turned into the new swans swimming on the lake behind the castle. Of course, rescuing them won’t be half as easy as figuring out what’s going on. Not that a bleak outlook will deter Meriel; she would do anything for her brothers.

I love fairy tale retellings. It’s a matter of taste, I know: some people are so sick of how many are out there and others can’t get enough. I’m one of the can’t-get-enough readers, because I like seeing how different authors can create almost incomparable finished stories from the same base inspiration. I especially like seeing less commonly retold fairy tales, though, and Zahler seems to specialize in that. I’ve read more Beauty and the Beast and Cinderella retellings than I care to count and, though I do still enjoy them, I’m pleased when I stumble upon fresher ground.

The back of my book compares Zahler to Gail Carson Levine, Shannon Hale, and E.D. Baker. I would very much agree. If you’re looking for more cute but empowering middle grade fairy tale twist fantasy, add Zahler to your list.