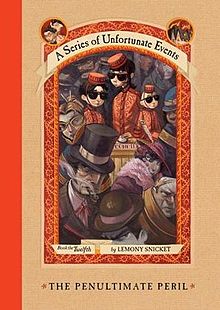 At long last we reach the second to last book in this tragic series. Momentum builds for a grand finale as the Baudelaires go undercover as concierges in a hotel that is mysteriously attracting almost every person, good and bad, from their recent past.

As if they don’t have enough difficulty telling friend from foe these days, there are also two managers named Frank and Ernest. One of them is an ally and one is a villain. Oh, but did I mention that they’re identical twins? In the end, the Baudelaires can’t tell who is who, so they can’t exactly reveal themselves or ask for help from either manager.

Nearing the end of the series we also see the Baudelaires straining to maintain their previous code of ethics. They’re starting to wonder what the good of doing good is if it only brings them so much bad. Doing the right thing has never served them well and you can see that harsh truth pressuring them like never before during their stay in the hotel.

My only quibble with this book is the long paragraphs. I haven’t compared, but I could swear this is only a trend with this particular book, not the whole series. The paragraphs run much longer then earlier books, to the point that some paragraphs go on for several pages before a new one. From a format standpoint, a paragraph is similar to a new sentence or a comma: it’s a pause between thoughts. To me, the long paragraphs feel very rambling and like I am not being given a moment to digest anything between these rambling thoughts.

The next book, the thirteenth, is the last in the series and I cannot wait to see how the orphans conclude their terrible story. Fingers crossed that they choose not to give up on good!
Posted by Rachel Hanley at 7:00 AM No comments: 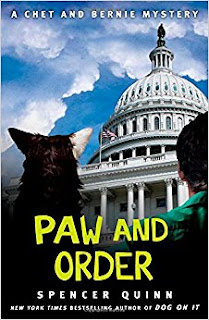 Private investigator Bernie takes his beloved dog and most trusted partner Chet to surprise Bernie’s journalist girlfriend Suzie after she moved away. The sweet surprise turns awkward when Bernie bumps into another man leaving Suzie’s place. Even more awkward when the same man turns up dead less than a day later and the cops suspect Bernie.

The unique spin on this mystery series is that each story is told through the dog Chet’s perspective. A lot of fixation on smells and food, folks! As I’m finding usual with these books, I enjoy the narration more than the actual mystery. It’s worth mentioning that I’m not much of a mystery reader anyway, unless there’s something thematically that appeals to me like a focus on dogs or books. I usually find myself far less interested in Bernie’s leads and theories and even the ultimate reveal than I am in Chet’s tangents, obsessions, and other cute dog behavior twisting and turning the case in unexpected ways.

A fun layer to this particular perspective is how Chet adores his owner Bernie. As far as Chet is concerned Bernie is perfect. Chet’s only begrudging, embarrassed criticism is on the issue of Bernie’s appalling human sense of smell. Along those lines I found myself impressed in this one with how much the author must have thought through all the smells dogs encounter. Chet comments on all kinds of details that never would have occurred to me, but that do make perfect sense.

This is another fun, quick read following an adorable, dedicated dog’s efforts at solving crime.
Posted by Rachel Hanley at 7:00 AM No comments: