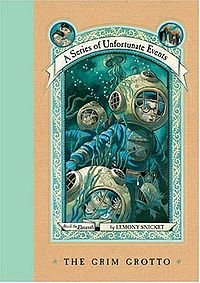 After barely escaping Count Olaf’s clutches at the end of the last book, the Baudelaire siblings find themselves, of all things, aboard a submarine. Here they continue their quest for answers while evading the relentless villain Olaf.

I like the shift in setting. The ocean is certainly a unique change of pace! In general, I prefer the whole series more when the books moved away from the repetitive going from one guardian’s house to another and on to more original locations.

Even this late in the series, we meet new characters. The Baudelaires make new friends and a possible new antagonist is introduced. Or perhaps an ally? All we know for certain is that this mysterious new person scares Count Olaf, which could be very good or very bad.

As more unfolds on the mysteries of V.F.D., alliances become a constant question mark. People the Baudelaires trusted have betrayed them and other times they discover surprising allies. It’s hard to know what to think anymore, but at least they can always remain confident placing trust in each other.

Sunny in particular emphasizes the passage of time throughout this series. She’s less an infant and more a notably mature toddler now. Her gibberish makes increasing sense, she walks instead of crawls, and her passions shift from biting things to cooking.

As I near the conclusion of this long series, I’m eager to see how it ends. While this is a re-read for me, I only remembered the first few books and from there everything else has felt fresh. I definitely don’t recall how it ends at all. The author has created a complex web of plot threads and I hope the end lives up to everything he’s designed.
Posted by Rachel Hanley at 7:00 AM No comments: 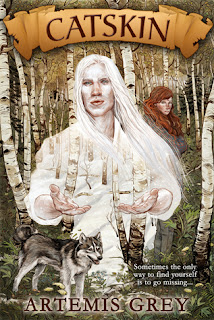 Review of CATSKIN by ARTEMIS GREY

Poor Ansel’s world turns upside down the day he finds a quiet, injured girl hiding in his parent’s barn. Having been teased most of his life for being albino, Ansel’s an introvert not partial to meeting anyone new. But with this girl bleeding out and no one else around, he starts taking care of her. He even nicknames her Catskin based on a fairy tale, and at first she does seem much like a stray animal: she won’t speak, she lashes out sometimes even when he’s only trying to help, and she seems driven by nothing more complex than survival.

Gradually, though, as she feels increasingly safe and loved, Catskin reveals more personality. Though she still won’t share her real name or talk about her past, she and Ansel form a connection he never would have anticipated. Not just Ansel. His entire family takes Catskin into their hearts, no questions asked. And they’re ready to fight for her when someone threatens to take her away.

This book is above all a heart warmer, rooted in themes about finding your soul family, rather than defining family only by blood relations. It’s also extremely romantic but without any actual bodice ripping. Ansel’s parents raised him on traditional values, so against his body’s urgings he won’t sleep with Catskin. Nevertheless, the sexual tension between them is one of the book’s primary drivers.

My only regret is that I wanted Catskin herself a little more developed. We follow Ansel’s point of view, so we feel very close to his every thought and reaction. Meanwhile, Catskin is a quiet, minimally expressive, closed off mystery. Without being privy to her thoughts I felt like I never got to know her to the degree I wanted.

This is a fun, warm, endearing novel about finding those people who become your home.
Posted by Rachel Hanley at 7:00 AM No comments: 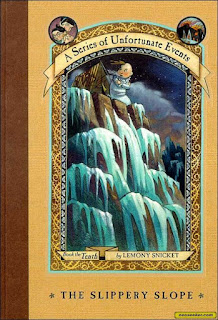 At the end of the last book the Baudelaires found themselves swept away by the current. Now they’re carried out to sea where a submarine fortuitously rescues them. On this submarine they make some new friends and run into some old, as well as uncover more information about the mysteries keeping them on the run.

I just adore the narrator’s voice in this series. Each book has several quote-worthy lines, but I’ll pick out my favorite from this one: “Fate is like a strange, unpopular restaurant, filled with odd waiters who bring you things you never asked for and don’t always like.” Too true, witty and mysterious narrator, too true.

Minor spoiler, but Count Olaf actually doesn’t play as much of a role in this book. At this point he has become a constant background threat even when he’s not around and, for that reason, probably isn’t needed on as many pages. Oh, he does make his obligatory appearance, but he isn’t driving this story anymore. The Baudelaires are far more preoccupied with pursuing answers.

We’re nearing the end of the series now. Even though these are re-reads for me, I don’t recall the ending, so I’m eager to see how the author wraps up all these ambitious plot threads.
Posted by Rachel Hanley at 7:00 AM No comments: 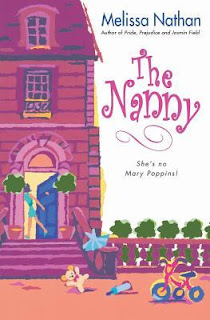 Review of THE NANNY by MELISSA NATHAN

This one was a re-read for me. At first I worried I had misremembered how much I liked this book, as it wasn’t holding my attention yet. Then around page 20 it became clear why this made my re-read list. Our main character Jo starts musing on why she has refused her boyfriend’s marriage proposals three times. “Did he really think she’d want to start their married life feeling like his role was to make the decisions, hers to agree or disagree with them?” I know chick lit novels are meant to be lighter in content, more about entertainment than deep reading, but my favorites always carry at least a small thread of deeper content to them. In this case, I respect Jo’s feminist values and that respect makes all the silly humor of the rest of the novel even more enjoyable.

The premise of this book is that experienced nanny Jo accepts a job in London working for a wealthy family. She’s a small town girl and this means leaving the place where she’s spent her life, leaving her parents, and leaving the boyfriend who keeps proposing. It doesn’t take Jo long to figure out why the salary for this particular family is so high, but she’s up to the task of learning everything she needs to on the job. However, things become a bit more complicated when her boss’s adult son moves in as well, to the room right next to Jo’s. She can deny it all she wants, but it’s obvious to the reader from the get-go that there’s chemistry there...and that Jo sidestepping around the fact that she does have a boyfriend isn’t going to end well.

The dialogue in this novel is particularly fantastic. There’s a big cast and plenty of pages where a conversation turns into a quick back and forth between several characters, often a very entertaining back and forth.

THE NANNY is a fun, light read with some real depth on women’s issues subtly woven into a lot of humor.
Posted by Rachel Hanley at 7:00 AM No comments: