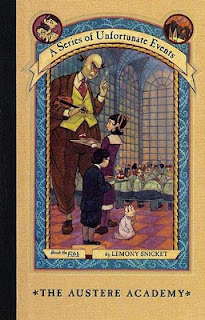 It’s off to boarding school for the Baudelaire orphans where the horrid vice principal assures them that having a few descriptive words entered into a school computer will ensure Count Olaf stays away from the premises. By now, though, the children are catching on that all adults are incompetent, so best they be as resourceful as possible.

I found this installment more engaging than earlier ones, because it’s where the three siblings meet triplets Duncan and Isadora. Yes, you read two names. Their third sibling passed away in the same fire that claimed their parents, but Duncan and Isadora insist that doesn’t change the fact that they’re triplets, not twins. (There’s really plenty of wisdom buried in the ridiculousness of these books.) The Baudelaires have had no one but each other for four books now and it’s a refreshing change of pace for them to meet others who are not only kind (for they’ve met other kind people), but actually helpful. For once, it seems the Baudelaires’ lives just got a little bit better rather than worse.

These books are much younger than I normally read, at the low end of middle reader, but I still love them nevertheless, primarily for the witty undertones. There’s an understated kind of intelligence to the absurdity. Take the following excerpt as an example: “Assumptions are dangerous things to make, and like all dangerous things to make - bombs for instance, or strawberry shortcake - ” And it seems baby Sunny’s gibberish often isn’t as nonsensical as you might think. Read closer.

I also like how the narrator keeps warning the reader again and again how horrible everything turns out and begging them to read something else. I, for one, intend to ignore him and keep reading.
Posted by Rachel Hanley at 7:00 AM No comments: 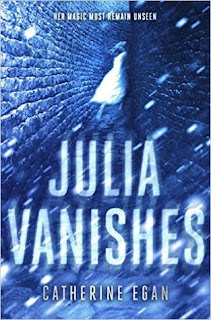 After yet another misfortunate befalls the Baudelaire orphans’ latest guardian, the infamously incompetent - if well-meaning - Mr. Poe arranges for the children to stay at a lumbermill. Little does he realize, once there the orphans are expected to work at the lumbermill under horrible conditions and for no pay.

Well, that's not quite true. The lumbermill pays its workers in coupons rather than cash, but without any cash the 2 for 1 and 20% coupons are tragically useless. This is an example of the kind of droll humor that peppers this entire series. You’ll also want to keep an eye out for the dedications at the beginning and letters to the editor at the end of each installment as both these play a role in the story.

At this point, book four in a long series, the plot can start feeling very formulaic, but Snicket manages to tamper with that formula just enough for each book to feel different and interesting. And I have to hand it to any author who can craft unique characters with such a small word count. My favorites in THE MISERABLE MILL include the useless sweetheart Charles and naively optimistic Phil.
Posted by Rachel Hanley at 7:00 AM No comments:

THE STREET OF A THOUSAND BLOSSOMS 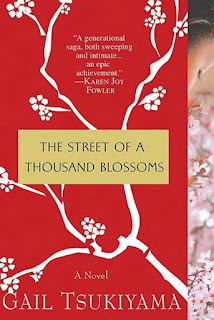 Review of THE STREET OF A THOUSAND BLOSSOMS by GAIL TSUKIYAMA

With this novel, Tsukiyama spins a tale of two brothers. Orphaned at a young age, Hiroshi and Kenji go to live with their grandparents. Strong Hiroshi and timid Kenji both discover their passions very early on in life: Hiroshi wants to be a sumotori and Kenji a mask maker. Hiroshi’s dream almost seems possible, while Kenji’s feels too far out of reach. Then both ambitions fade into the background as World War II devastates Japan.

These brothers’ lives are interwoven with that of two sisters, daughters to a famous sumo trainer. Like Hiroshi and Kenji, one has a stronger and another a weaker presence. After their mother’s violent death during the war, the elder sister Haru takes charge, helping her household as well as her father’s sumo pupils. Then she moves on to university where she grows into a strong-willed, smart, modern young woman who pushes against Japan’s traditions. Meanwhile, Aki wilts after their mother’s death, never recovering from the trauma. She’s quiet and withdrawn, unsure of herself and less capable of all chores Haru leaves behind when she goes to university.

These four characters form the heart of a story that spans most of their lifetimes.  I am a very character-centric reader and am happy to report that everyone here feels like a real person, and the intricacies of their relationships when they interact is what held my attention.

My only criticism, and if I recall this is true of the other book I read by this author, is that the storyline feels a little too tragic for my taste. There tends to be a theme in Tsukiyama’s writing of people making the wrong choices. As the reader, these mistakes seem so obvious and you can almost imagine an alternate happily ever after for the characters if they did even one thing differently. But they don’t. The characters can’t see what seems to the reader, or at least me, like the smart choice, and they pay the price for that emotional blindness. My favorite stories usually feature active characters who take control of their lives. Tsukiyama’s characters feel more like they’re surrendering to life, fixated on a certain path to the point that they don’t notice they have other options.  However, she does portray a very realistic phenomenon and the character decisions, if sometimes frustrating, are always believable.

THE STREET OF A THOUSAND BLOSSOMS is about four specific children surviving a changing Japan, but it’s also a beautiful tale about family, emotional bonds, and pursuing our passions.
Posted by Rachel Hanley at 7:00 AM No comments: