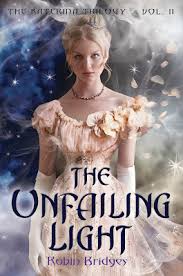 Katerina’s adventures continue in this second installment in a gripping trilogy about dark magic in 19th century Russia. She’s ready and eager to start medical school, but then the tsar waylays her plans. Given Katerina’s unique position as the only one capable of defending the tsar from a particular threat, he can’t very well afford to have her far away from him, for both his protection and her own. To make matters worse, it’s Katerina’s love interest, the tsar’s son George, who has to deliver this news, proving that Katerina is a bit of a shoot-the-messenger personality.

So Katerina finds herself back at her dull school for ladies, again roommates with Danilo’s sister. George goes off to study with wizards in France, leaving Katerina (and literally, thanks to a spell) trapped at the institute. With a violent ghost, apparently. And unfortunately the same spell that holds Katerina captive also suppresses her magic, so she’s about as powerless as anyone else to stop the ghost.

Thanks to a plot driven storyline, a very fast pace, and short chapters, it’s easy to tear through this whole novel in a few sittings. The book does and doesn’t suffer from middle book syndrome. On the one hand, I found it thoroughly engrossing from beginning to end. However, when I step away from the text and start thinking about the storyline, not much happens in this installment. The majority of it (maybe as much as three quarters) is build up to the actual developments.

I did continue to find Katerina quite a passive heroine. She spends most of the novel observing rather than taking part in events and always takes her boldest steps in each book’s climax. I do feel very frustrated that even Katerina’s amazing magical feats are usually accidental. She doesn’t understand or have much control on her powers. It would be more satisfying for me to feel she’s earned her impressive feats, but instead she’s usually looking around confused and asking, “Did I do that?”

In general, Katerina does feel like a Mary Sue. I like the layers to her character, but everyone else in this fictional world revolves around her. The rest of the cast is drawn in rough strokes and often has unclear motives that seem more explained by the fact that Katerina (and the book) needed them to do that. In my favorite stories, every character, no matter how small their role, seems the star of their own story that we’re simply not reading at the moment.

I also continued to find myself confused by the characters. In this one, I mixed up titles, relationships, and light vs. dark court alliances. Sometimes it made scenes very difficult to follow if I couldn’t pinpoint those important details. I do like huge casts when the author can handle them, but in my favorites the author usually either manages to make each character unforgettably distinct or she offers a small reminder in important scenes that helps with context.

Criticisms aside, I would definitely call this series a page-turner and can’t wait to read the final novel.
Posted by Rachel Hanley at 7:00 AM No comments: 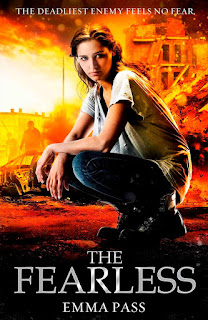 Review of COLD BURN OF MAGIC by JENNIFER ESTEP
(first in the BLACK BLADE series, based on a review copy)

I have criticisms aplenty for this book and yet I enjoyed it nonetheless, because the characters won me over. Lila lives on the streets, or rather squatting in a library, and earns a living running odd theft jobs. In a world run by powerful, magical Families, she does what she can to stay out of their squabbles. After all, the same can’t be said for Lila’s mother and that’s why she’s dead. Then Lila does the honorable thing and saves an important Family boy when he’s attacked right in front of her. Before she knows it, she’s roped into being his bodyguard and that position hasn’t ended well for the last few people who held it.

As far as my many criticisms, I’ll list a few. For starters, I couldn’t root myself in the setting for several chapters. It took me a while to figure out what time period this was supposed to be. (Answer: today.) While the language seems modern, everyone’s using swords. We later get an explanation for that...but the explanation makes no sense. Supposedly everyone uses swords, because they’re made of a special magical metal, but then why can’t they use that same magical metal for guns or more modern weapons? In general, there were a lot of logic gaps that kept distracting me from the actual plot. The beginning also opens with a big information dump explaining how magic works and despite these explicit explanations I still had so many unanswered questions. An important lingering confusion was that I didn’t understand Lila’s unique transference magic and exactly how it works. It doesn't actually seem that useful based on what I read, but everyone acts like it’s incredibly powerful. There’s also a lot of speculating about what others are thinking as well as characters talking to themselves as Lila walks into a room, which seems a kind of clunky way of getting around the fact that we’re only in Lila’s viewpoint. The last criticism I’ll throw out is that the book’s depiction of mobsters feels very cheesy and cliché.

Obviously, I found a lot to nitpick, but despite it all I like Lila. She’s spunky and resourceful and had a direct way of thinking I admire. For example, plenty of books feature characters bent on revenge for a death of a beloved one. Lila addresses that the thought of avenging her mother’s death is tempting, but “I liked living a little too much to throw my life away on some suicide revenge mission.” I’ve read so many characters that don’t think any farther past the urge for revenge that I admired Lila’s maturity in understanding the consequences of seeking vengeance and whether it would really be worth it.

I also liked Devon, despite being the kind of moody and sulky love interest that can usually drive me crazy. I saw to his good heart as did Lila and he seems too sweet and caring for the lifestyle he’s living. I loved Felix, Devon’s outrageously chatty and flirtatious friend. Some of the other characters - Mo, Claudia, Oscar - feel a little more flat, but these three ringleaders had enough nuanced layers to make me really care what happens next to them.

Though this novel has enough closure to the main plot thread, there are lots of other allusions to additional secrets and clear plans being prepped for future books. In all honesty, I likely won’t read on. There are already too many books and too little time and the negative here outweighed the positive too much for me to go seeking out sequels. That being said, for anyone who’s curious if this book is for you, it’s an easy, fast read and won’t take much time to decide.
Posted by Rachel Hanley at 7:00 AM No comments: