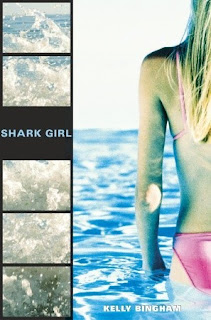 Fifteen-year-old Jane loses her arm in a shark attack, but she’s lost more than that: her innocence, her privacy, and most crushing her artistic talent (dependant on her good - now gone - hand). To friends, acquaintances, and strangers alike, she is now known as Shark Girl, as a story rather than a person. SHARK GIRL is simultaneously an affecting tale about healing as well as a convincing portrayal of the intrusive nature of media.

I loved this book and, to be honest, I wasn’t even sure I would like it. I’ve mentioned before that I have a lower standard for books I listen to on audio rather than read. I also have a lower standard for books I borrow from the library rather than buy. If I pay for it and have a physical copy that I’ll likely keep, I better like it. However, I’m much more willing to take chances on borrowed books. I took a chance on SHARK GIRL and am immensely grateful that I did.

And it wasn’t love at first sentence either. Initially, I balked at the lyrical style of prose. This book is written in verse. Don’t worry; it doesn’t rhyme. However, it does utilize line breaks for adding rhythm to the words that puts one more in mind of poetry than a novel. However, I’m a big believer in the idea that first you need to understand the rules before you can break them. The reason I shy away from novels written in verse is that usually, well, it’s terribly done, something the author thought would be a unique idea but it’s only a poorly executed distraction from the story. I’m relieved to say that SHARK GIRL is one of the exceptions. Once the story hooked me enough, I moved past my prejudices and actually began to admire how deliberately the line breaks add beats between thoughts, pauses within a sentence.

Of course, the writing style also makes this an extremely quick read. If you are remotely interested in this book, you have no excuse not to read it; it will take you hardly any time at all. I finished in three days, and those are days I worked eight hours, wrote, worked out, socialized, and read chunks of other books. My point is that I think had I focused on SHARK GIRL alone, I could read it in maybe 2 hours.

I also admire the author for how succinctly she crafts her characters. With minimal words, she creates a complex and believable cast, only telling us as much as we need to know and often revealing quite a lot with only a little.

First there’s Jane and how can’t you sympathize with her? She resents all the media attention and the book includes an assortment of letters from strangers that demonstrate the wide range of compassionate to insensitive (not to mention unsolicited) feedback drowning this poor girl. In particular, Jane hates the idea of herself as some kind of showcase for survival. She isn’t ready to be grateful that she’s alive; she wants some time to be bitter. Most of all bitter about the loss of her spectacular artistic talent.

Then there’s all of Jane’s family and friends. I challenge anyone not to fall for the little boy Justin who Jane meets in physical therapy. Then there’s Jane’s mother with her admirable support but also relentless pushing her ideas of how Jane should move on. (Like switching to digital art, which wouldn’t be as hard with her non-dominant hand, but Jane wants a pen and paper.)  Jane’s brother, like many siblings, is at once her hero and arch-nemesis. He saved her life and does his part to shelter or challenge her as needed, but sometimes the challenge part isn’t welcome and his blunt honesty can be merciless. Even Jane’s friends mostly understand, but she still encounters some callous comments and efforts to mold Jane into the post-trauma heroine they want in their lives.

Like all good books, the core of this story is universal. It’s about being yourself. When the whole world is crushing down in an effort to shape you to other people’s image for you, the most heroic thing you can do is shape yourself.
Posted by Rachel Hanley at 7:00 AM No comments: 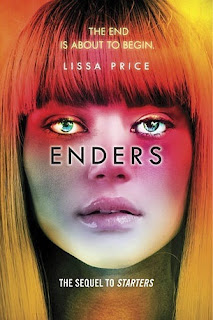 ENDERS by LISSA PRICE
(second in the STARTERS series)

For those of you who need a refresher, in the first book of this series our protagonist Callie agreed to essentially “rent out” her body to rich elderly people eager to experience youth again. I don’t mean rent in a sex trade type of way, but rather in reference to the science fiction technology in this novel that allows someone to experience life through another person’s eyes, even controlling that person’s body. Horrible as it sounds, Callie needed the money to save her sick brother.

Callie may have overthrown one harmful system in the first book, but if she’s trying to make the world a better place her work is far from done. Now that Prime has been disbanded, people are still going around collecting Metals, the new term for anyone who has the chip allowing them to be controlled by another. And it’s not like Callie can just have the chip removed, since it explodes if you try.

In general, this is another fast paced book, chock full of suspense and action, twists and turns. The rapid progression of events combined with easy sentences and short chapters make it a very fast read, too. While plenty of people will love this about the book, I did find the story a little more plot focused than character focused for my taste.

My only other criticism is a bit of spoiler so skip this paragraph if you want. I’ll avoid specifics, but how Callie accomplishes her victory at the end of this novel feels too arbitrary for me. I know this series is much more soft sci fi than hard sci fi, but the technical description of how she does what she does feels closer to fantasy than anything science.

However, I’m pleased to say that the ending leaves this series open for further novels. And Price does have a real knack for writing satisfying endings that resolve all essential plot threads while leaving a few interesting doors open inviting us in for more story. Fingers crossed!
Posted by Rachel Hanley at 7:00 AM No comments: 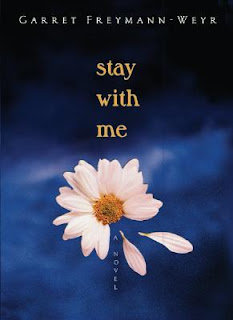 Review of STAY WITH ME by GARRET FREYMANN-WEYR

Leila has an unusual family. Her father has two other daughters from a previous marriage, both much older than her. Though Leila wants their affection, she’s not convinced they see her as much as a sister as she does them. Leila also had a surprisingly close relationship with her father’s ex-wife, before she died. Unusual or not, this is Leila’s normal...until her half-sister Rebecca commits suicide. Then, due to complicated circumstances, Leila finds herself living with her other half-sister Claire while her parents leave the country. Leila calls all these changes her “new now,” because she knows nothing will ever be the same again.

I adored the voice of this novel. From an objective point of view, I suspect critics would say there’s far too much interior monologue, but it works. This is Leila’s story and her thoughts drive the story as much as her actions, especially when we’re treated to a shift in her outlook.

I also enjoyed reading about Leila’s struggle as an ambitious dyslexic teenager. Though hardly the focal point of the book, the story opens with Leila mentioning her dyslexia as she worries she’s probably not starting this tale at the right place. This shortcoming pops up throughout the novel and what struck me was how much others dismiss Leila as stupid because she struggles with reading. There are plenty of other ways to be smart. I present Leila as evidence, since she’s unusually - but believably - mature for her seventeen years.

Speaking of seventeen, my only real issue with this story is that Leila’s primary love interest is thirty-one. Before you write off this book at that, I will add that the author handles it impressively well. However, stop reading this paragraph right here if you don’t want to read any specifics about the plot that might count as spoilers. Due to height and maturity, people often mistake Leila for older than seventeen. When Eamon first meets her, he thinks her in her twenties and probably too young for him, but when he learns she’s actually seventeen he backs off immediately, telling her they shouldn’t be more than friends and really probably shouldn’t even be that. They do become friends, though, friends with a lingering romantic undertone. It’s obvious they both want more, but know the taboos of their age difference. I commend the author for also working in another important theme here: everyone will judge you and you need to do what’s right for you despite all those voices. Both Eamon and Leila recognize how odd their relationship looks to outsiders and that most people assume he’s the predatory older creep leering after a naïve and gullible young body. To the reader it’s clear that Leila is far more than a body to Eamon. He admires and respects her ways of thinking and wants to hear what she has to say. They both bristle at what people imply (and state explicitly) about them, but resign themselves to the fact that they don’t get to control what other people think and should focus more on whether they think there’s any truth to the comments or not.

I rarely re-read books, but I have the sense that STAY WITH ME would be well-worth reading again and again. Especially as someone who primarily loves stories about characters, I cherished this up-close portrayal of a dynamic young woman coping with her new now.
Posted by Rachel Hanley at 7:00 AM No comments: 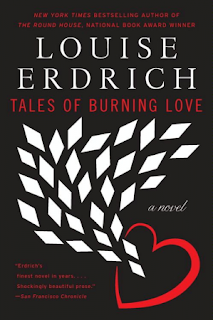