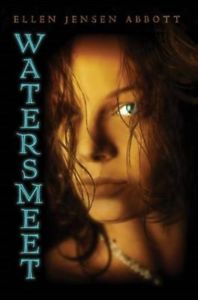 Shunned by her village for her dark skin, Abisina has grown used to her life in the shadows. She lives in an overtly bigoted society that outcasts anyone who strays from a specified physical ideal. She’s not without bitterness, but you could say she’s found peace with her lot in life. Until a tyrannical ruler comes to her village, warning everyone against tolerance, spreading the fear of spiritual repercussions unless they cleanse the village of the toxic outcasts. In the course of one speech, Abisina’s harsh life goes from one filled with bullying and insults to a full-fledged fight for survival. Her mother speaks of an impossibly wonderful place called Watersmeet where they’ll be safe. It sounds too good to be true, but at this point Abisina doesn’t have anything to lose by striking out in search of something better.

Thematically, this is a story about prejudice above all else. War also plays a big role, but that ties in with what happens when people start dividing into groups and facing off against each other. Though a victim of prejudice herself, Abisina doesn’t recognize her own narrow-mindedness as she strays out into the bigger world full of all kinds of people (or creatures, in the case of a fantasy novel).

I stumbled over one major revelation later in the story, because I couldn’t follow the leap of logic that led Abisina to her correct conclusion. It felt too much like the character knows this now, because the author needs her to know this now. How she suddenly knew something with such certainty that struck me as random threw me out of the story.

This is the first in a series and, though I gripe and grumble about last minute realizations that I’m reading a first book rather than a standalone, I admire how WATERSMEET feels like both. There’s a satisfying story arc and as well a fulfilling ending, with only the faintest hint of more story to be told. I suppose it’s really first books with sudden cliffhangers that send me into fits.

Without spoiling too much, Abisina learns by the end that she may have won one battle, but not the war. Especially if we’re talking a war against prejudice. That’s a long, complicated war potentially impossible to ever “win.” But Abisina intends to do her best.
Posted by Rachel Hanley at 7:00 AM No comments: 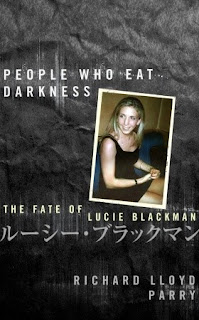 Review of PEOPLE WHO EAT DARKNESS: THE FATE OF LUCIE BLACKMAN by RICHARD LLOYD PARRY

This is the first true crime book that I’ve ever read. In general, I find real darkness much more upsetting than fictional darkness (and I’m hardly alone on that count). When I read or watch an invented act of violence, I can comfort myself with the fact that it’s pretend. Books and movies based on true events almost always strongly affect me, because I’m an extremely empathetic person and I find myself thinking about the real life victim, her family, her friends, her final moments.

Someone recommended this book to me primarily because it’s about a British girl murdered in Japan and he thought I, as someone born in Britain who has studied Japanese language and culture, would find much of the cultural context fascinating. He was certainly right there.

Though in many ways horrific in the facts, I enjoyed this book far more than I expected. For starters, the writing surprised me with its subtle skill. I often find that my enjoyment in nonfiction hinges on the writing. An author can know his material, but if he can’t write smooth, appealing sentences that transition easily from one idea to the next, the material alone won’t hold my attention. Parry took a complete stranger to me, Lucie, and made her feel like a friend - or at least like her fate could happen to one of my own actual friends. We tend to disassociate ourselves from dreadful news stories with reassurances of how we differ from the victims, weighing those differences as proof that the same thing couldn’t happen to us.

Aside from the writing, the other reason I liked this book is because there is simply so much that is psychologically compelling. If everyone in your book group can handle the heavy content, talk about great fodder for discussion.

First, there’s the nature of what Lucie was doing in Japan: hostessing. For many Westerners, this at first explanation sounds like an escort service. A Japanese hostess provides the pleasure of her company in exchange for money. However, that company does not include sexual services. Some have compared it to being a modern geisha, which a stretch but alludes to the fact that the girls pour the customers’ drinks for them and generally attend to them with ease and grace. Mostly, though, the girls carry a conversation. If the customer wants to vent about work or droll on about his boring hobby, they listen with (usually feigned) fascination. If the customer brings current or potential business partners, the hostess does her part in making the customer look good to his peers. If the customer is quiet, the girls keep the conversation alive. If the customer tells bawdy jokes, the girls smile politely. However, the customers understand that the girls’ obligation ends there. The hostess will not be sleeping with them. If that’s what they want, there are other places the customers can go. Usually the only customers confused by this invisible boundary are non-Japanese. Parry cites first hand accounts of Europeans frustrated when a hostess won’t come back to their hotel rooms and demanding to know why she flirted so aggressively then. Answer: because that’s what the client paid for, flirting but not sex. One anthropologist called it an orgasm of the ego. A hostess is being paid to make the customer feel good, just not in the same way as a prostitute. Having studied the Japanese language and culture myself, I’m already familiar with hostessing and some of the common cultural confusions and nodded along at Parry’s explanations of why Lucie’s job clouded people’s understanding of the case. Many Westerners assumed her fate should be an expected possibility with her job.

Then there’s Lucie’s family and friends and their varied reaction to her disappearance, the long and painful search for answers, and the sickening truth. Parry talks about how grieving families are expected to play a certain role in the media and people like them less if they don’t conform to the expected role. Lucie’s mother fit the role perfectly: she cried, she pleaded for help from anyone who could offer it, and she yelled at journalists to give her space during this difficult time. Lucie’s sister Sophie wasn’t that unusual either. Though she frequently appeared more angry than sad, people recognize that as another reaction to grief. Based on Parry’s portrayal, I would say Sophie had little tolerance for fools. He describes ground-out answers to dumb, obvious questions about how she’s feeling and includes her cynical statements about the media, her friends, family, the world, and well, most everything. Most controversial, though, is Lucie’s father. He championed her case in the media, doing everything he could to stir up and hold the world’s attention so she wouldn’t become another cold case. However, he’s faced numerous accusations of enjoying himself a little too much, including that he liked all the fame and attention, that he had fun going to the clubs on the pretense of interviewing hostesses, and that he took advantage of people donating money to search for Lucie and spent it on himself. Parry offers up the possibility that part of people’s negative reaction to Lucie’s father was the fact that he didn’t appear upset. Of the many ways to grieve, completely calm and collected unnerves people the most.

My review is already stretching out, so let me summarize some other aspects I found intriguing: the media portrayal and what caused Lucie’s story to be such a sensation, the Japanese police and their alarming mishandling of this case, the killer’s long history of using women and his state of mind, and the body image issues that emerge through both excerpts in Lucie’s diary and the killer’s admission that he often preys on “ugly women” or at least their insecurity that they might be perceived as ugly.

I’m sure being a mostly fiction reader affected my perception of this nonfiction book. I worry I talk about these real people a bit too much like characters, and occasionally - especially at grim details - I would catch myself wondering at the writer mind who could imagine such a twisted act...only to realize, “Oh. Right. This is real.” I strongly agree with a quote on the back of the novel: “by turns, a non-fiction thriller, a courtroom drama and the biography of both a victim and a killer.”

While the author’s skilled writing makes this read at times like a gripping, convoluted, and gruesome mystery novel, he also manages to drive home that Lucie is real. By portraying a heartfelt look at her family’s grief, he tugs on the reader’s empathy and it’s easy to spend most of the book imaging how you would feel if Lucie were your daughter, sister, or friend. Definitely too dark for some, but an affecting effort at ensuring a life lost doesn’t equal a life forgotten.
Posted by Rachel Hanley at 7:00 AM No comments: 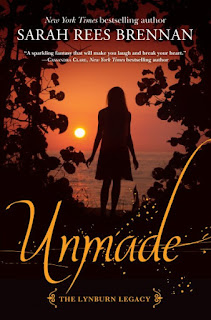