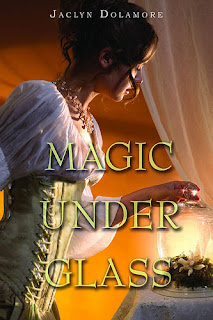 Nimira feels like she has fallen in life. Once she was an admired and appreciated singer performing alongside her famous dancer mother in a breathtakingly beautiful palace. Then she moved to a new county to make her own way and seek her fortune only to discover performers aren’t as respected everywhere. Now she sings in dingy settings for little money and condescending patrons. When a handsome young man offers her an unusual position as accompanying singer for a wind-up automaton that plays the piano, Nimira knows she’s taking a risk running off with a stranger but doubts life could be much worse than it is now.

The handsome, rich stranger - let’s call him Hollin - warns Nimira from the start that he has already dismissed several girls from the same position because the automaton is so lifelike that they won’t stop raving about the idea that it’s haunted. Hollin reassures her that no such thing is true, but does admit that the automaton was made by fairies and is exquisitely animated and convincing.

This book boasts wonderful characterization. Despite some familiar “roles,” Dolamore avoids any stock characters. They each feel realistically layered and complex, like real people. The relationships, too, feel unique and truthful rather than like the same standard dynamics we see again and again.

I’ll take half the blame for my only complaint: that I didn’t realize this is the first in a series. I’ve mentioned before that I like to know that detail when I start a book, because I have this sense of expectation for whether the story will wrap up by the final page or leave threads open for the next installment. I thought MAGIC UNDER GLASS was a standalone right until I reached the end and the story practically cut off halfway. I look forward to reading the next one, but wish I knew that going in.

This is a quick read, too, easily digested in one or a few sittings. The fast pace of the story and the engaging characters keep the reader fully attentive on each page, so you can just keep turning, turning, turning until you abruptly find the end.

With this young adult fantasy, Dolamore spins a mesmerizing tale of automatons and fairies, love and betrayal, music and politics. This is an atmospheric story that pulls you into Nimira’s world of magic and melodies.
Posted by Rachel Hanley at 7:00 AM No comments: 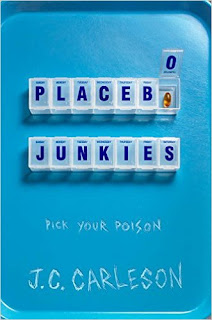 Review of PLACEBO JUNKIES by J.C. CARLESON
(review based on an advance reading copy)

Audie fancies herself a rebellious genius. She and her friends play the system by volunteering for drug trials, for which they receive reimbursement, of course. They lie about their ages, medical histories, what other medication they might be taking, you name it. Whatever it takes to get that cash in their hand. Sometimes they’re caught, some of them even permanently black marked from participating in future trials, but not Audie. She treats this like a job, a science even, calculating exactly what she can get away with and what her body can take.

Then Audie’s friend has a crazy idea. Rather than a trial here, a trial there, a slow pace to stay under the radar, why not push full speed for a short time and really cash out? Sign up for as many, or more, trials than any human body could possibly handle and collect as many payments as possible before getting caught. At first, Audie thinks, “No way,” but then she considers her boyfriend Dylan, the one bright light in her dark, dim, lonely life. Audie’s a mess really and she knows it, but Dyaln’s a good boy, someone with a more normal life, family, and home. Someone who’s sweet and considerate and much more wholesome than any of her friends. And, in a twist Audie finds standard for her life, her wonderful boyfriend Dylan is dying. They met because she’s always around hospitals searching for a score while he’s always around hospitals, well, you get the idea. It occurs to Audie that if she goes along with her friend’s one-last-big-payout idea, she could afford to do something incredibly memorable for Dylan’s birthday, maybe take him on a trip. And that’s how Audie finds herself tripping down a path of terrible decisions.

Let me mention right now that this isn’t the book you think it is. Trust the author. Things that don’t make sense now will make sense later. I had a lot of doubts and questions undermining the story for me at first until the pieces filled in enough for me to see the big picture. It’s an emotional wham! when it hits you, what’s really going on. Audie isn’t a reliable narrator with how many drugs she’s taking and as the story progresses, you’ll figure out where her version of the truth isn’t the actual truth.

PLACEBO JUNKIES is a skilled mind-trip that made me want to immediately re-read the book the moment after finishing it so I could catch every twist and nuance that would have been lost on me in the first read.
Posted by Rachel Hanley at 7:00 AM 1 comment: 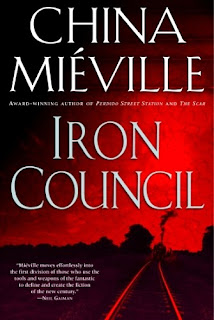 This final installment in Levine’s charming PRINCESS TALES series spoofs “The Golden Goose.” Baker’s son Robin meets princess Lark and they like each other right away, especially each other’s sense of humor. Then Lark’s father, the king, tells her she can’t marry a commoner; she must marry a prince. In her version of the silent treatment, Lark stops laughing and smiling entirely after that ultimatum. Desperate to cheer up his daughter, the king finally announces that she can marry the first prince who makes her laugh.

We already know it’s Robin who will make the sulking princess laugh, but as to how he slips by the prince requirement you have to read the book to see. Of course, how he makes her laugh provides plenty of entertainment in itself, too.

As for all these short tales, Levine populates her slim story with amusing, colorful characters. Robin’s father tells pompous, piteous poems. His brothers invent words, in the same manner as a lot children do or people who are either intoxicated or simply silly, but the punch line here is that the brothers think themselves utter geniuses for their stuplorable vocabulary. You also have to love Robin’s unrequited admirer, whose personality might be lacking in some ways but certainly not in confidence.

I’m sad to see this series end as I could happily read as many PRINCESS TALES as Levine could write. Who knows, maybe she’ll add a few more in the future.
Posted by Rachel Hanley at 7:00 AM No comments: