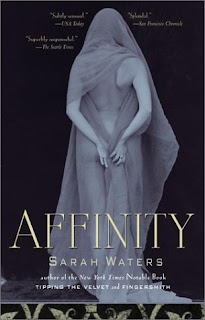 Review of AFFINITY by SARAH WATERS

Lady Margaret Prior doesn’t fit in with respectable Victorian society. She refuses to marry a man (She prefers women.) and her recent suicide attempt is simply intolerable. Of course, her most damning trait is that she speaks her mind.

At the book’s opening, Margaret is transitioning back into society after her breakdown (an emotional collapse initiated, we learn, by her lover leaving Margaret to marry her brother). Margaret starts visiting a nearby prison, specifically the women’s wards. Officially, the visits are for intellectual betterment and research purposes in understanding the psychology behind these women so different from herself. Many even muse that hopefully, as a lady, she will have a positive effect on the poor, piteous women she visits. However, the astute reader will pick up long before Margaret states it explicitly that she’s drawn to where she feels she rightfully belongs. She meets women who are in the prison as punishment for attempting suicide, commoner women. Margaret knows she only avoided the exact same fate because she’s a lady.

I normally don’t value setting as much in a novel as other factors, but the era (time more than location) is essential to this story. Margaret lives in a suffocating, restricting society. I fear if I were only a slightly more empathetic person I could have panic attacks just imagining myself in her life. There’s an undercurrent of danger woven throughout every page, the danger that one wrong step in proper society could cast Margaret out. Not “out” to mean merely shunned and ignored, but “out” to mean locked away in prison where she can’t bother others with her contrary opinions and actions.

At the prison, Margaret meets a woman named Selina, who claims to be a medium. During a séance, an elderly patron was murdered and a young women molested. By a naughty ghost, Selina claims. Of course, that explanation doesn’t convince respectable society and Selina is sent to Millbank prison where she meets Margaret. Lady Margaret doesn’t buy Selina’s story either...at first. Then strange things start happening, things Selina couldn’t possibly do without aide, of spirits she insists. Margaret finds gifts left in her room from Selina, who can’t possibly have sent them from prison, and when she visits Selina knows things she can’t about Margaret’s past. Against all logic, Margaret starts to wonder if Selina is an innocent victim who has been telling the truth all along.

My only complaint with this otherwise wonderful novel is with the final twists near the end. I saw certain revelations coming from maybe a quarter through the novel and felt relieved when I thought the author wasn’t going down that obvious route. That being said, I think the twists might be more obvious as a writer myself. Thematically, the developments are meaningful and very interesting for discussion, not to mention well-handled. However, as a writer it seemed the natural, predictable way to turn the story and I had hoped for something more subversive.

Like many good ghost stories, AFFINITY haunts, leaving a king of lingering imprinted emotion even after finishing the book.
Posted by Rachel Hanley at 7:00 AM No comments: 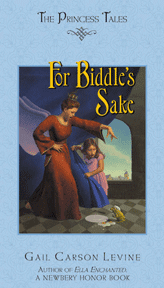 You might have thought the second book concluded the wayside school series - what with the school being taken over by cows at the end - but never fear; the strangest, silliest fictional school is back for an actual final installment.

This concluding volume has more of a storyline than the previous books. Where earlier ones featured disparate chapters connected by a bizarre setting and goofy characters, this felt more like a story than the others. Each chapter still tells its own very brief tale, but with this installment the chapters connect from one to the other more - which, perhaps, could be why this one’s definitely my favorite. I like silly and witty, but I still need a little order.

Some of the highlights from this volume include a string of uniquely terrible substitute teachers, a hypnotist school counselor, plenty more ludicrous conversations, an embittered woman with three ears, and useless elevators. These books are nothing if not unique!

While the earlier books felt a little more juvenile re-reading them as an adult, this last one made me sad to see the series end. I love a little social commentary rolled into something cute and comical, and the Wayside School series injects every silly page with serious subtext.
Posted by Rachel Hanley at 7:00 AM No comments:

CINDERELLIS AND THE GLASS HILL

In Levine’s version, though, our lead is a boy nicknamed Cinderellis by his annoying brothers. His brothers aren’t cruel, though, merely daft and unappreciative. Cinderellis has a knack for magic and he’s always creating magical inventions to make simple tasks around the farm that much easier and more successful. His brothers, sadly, refuse to ever acknowledge his inventions, always crediting some other force or factor, much to Cinderellis’s disappointment.

Then there’s Princess Marigold, our soon to be princess on a glass hill. Her father has an obsession with quests, always searching for the unlikely or, better yet, impossible. When he finds himself between quests, and bored, he decides it’s time to look for a husband for his daughter, and what better way for weeding out potential suitors than a seemingly impossible task - such as scaling a glass hill to reach her.

I love that Princess Marigold isn’t a helpless victim in this arrangement. She sneaks water and oil onto the top of the hill with her so she can pour down something slippery and sabotage anyone she doesn’t like. She also has a cat named Apricot, who - like a lot of cats in my opinion - is somewhat boring except that Marigold projects a personality onto him.

Another sweet, slim novel with endearing characters and an entertaining wit.
Posted by Rachel Hanley at 7:00 AM No comments: