Review of EVERY DAY by DAVID LEVITHAN

Every day A wakes up in a different person’s body. A took this simple name for themself, because they have no consistent name, physique, friends, family, gender, life. Every day A is someone new. In fact, A (unintentionally) borrows another person’s body for the day. A is considerate about the fact that it’s not their life. Every single day is a day stolen from someone else, so it’s never a day for A to do whatever they want. Then A meets Rhiannon, someone they want to see the next day and the day after that, someone with whom A hopes they could form a long-lasting relationship rather than the millions of single-day parents and best friends A has known.

As a writer myself, I found the premise utterly fascinating. The concept explodes with questions and I recognize what a challenge it would be to write something like this. I already loved Levithan’s work, but I admire him for tackling such a brave notion.

Amazingly, A does have a distinct personality despite no single body. Dry wit. Observant. Unusually mature for their age, but expected for their circumstances. A has mastered the quick assessment of a person. While A can access their current body’s memories, it’s not an easy, immediate task, so A often works from cues. They know how to summarize their temporary family and friends and look for signs that anyone expects something from A (or rather from whomever A’s residing in that day).

As always I found Levithan’s writing beautiful and popping with plenty of sharp insights that resonate with me enough to bookmark. I nodded along with A’s breakdown of kindness vs. niceness. A believes niceness is superficial, an indication more of how you want to be perceived, while kindness is unselfish and sincere, a genuine reflection of your character. I also know I’m not the only one to pull out the following quote as exemplary: “Love can’t conquer anything...It relies on us to do the conquering on its behalf.”

The nature of the magic system raises countless discussion questions about identity. A isn’t tied to specific friends. Even if they like certain kinds of people more than others, they likely won’t see them the next day. A has not had a typical childhood. In fact, A has been molded more by society overall than any one particular household. A doesn’t have hobbies or much opportunity to hone a specific skill. A views gender more fluidly than your average teen since they’re often in a girl’s body one day and a boy’s the next. A views themself in emotional and intellectual terms rather than physical. And identity is only one category of questions. Then consider the ethics. A has no control over this body swapping, but they still feel like an imposter and a life thief. A lives so carefully as not to interrupt a person’s life, but then rarely lives for themself. A constantly considers how actions in a single day could affect the next day, week, month, year, lifetime for the person who will take their life back in 24 hours. A battles with unanswered questions about what they are and whether any amount of deliberate effort can ever outweigh their accidental body snatching.

One of my few criticisms in an otherwise fantastic novel is that I didn’t understand what was so special about A’s love interest Rhiannon. As A mentions repeatedly, they have seen so many people in their lifetime. Rhiannon didn’t strike me as unique enough for me to believe A has never met anyone like her. Her special qualities were usually told and rarely shown. Upon first sight, A thinks she’s different, special enough to jeopardize the whole system A has worked out for laying low, but I never followed the logic or emotional reaction about why A admires Rhiannon so much. Nothing against her. She’s a strong character, but I don’t think she’s one of a kind and I don’t buy that A has never met someone like her before.

I read this entire book awing at the ambitious scope and wondering how the author would begin to end something this complicated. The good news is that EVERY DAY is a terrific book, but the bad is that its scale makes it difficult to find a satisfying ending. The story feels like it cuts off as it’s only really picking up and one primary resolution felt, for me, sweet but forced.  I finished the book with a combination of lingering respect and unsettled questions.
Posted by Rachel Hanley at 7:00 AM No comments: 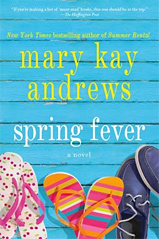 Review of SPRING FEVER by MARY KAY ANDREWS
(review based on audiobook, read by KATHLEEN MCINERNEY)

SPRING FEVER opens with a wedding. In fact, Annajane Hudgens sits in stunned silence as she watches her ex-husband Mason marrying another woman. Then something stops the wedding and the couple has to postpone it for a while. Annajane has tried and tried to convince herself that she’s over Mason, that she’s fine with his remarriage and blissful in her own recent engagement, but now fate has handed her an opportunity to call her own bluff, if she has the courage.

I found this another simple, enjoyable read from Mary Kay Andrews. The story features engaging characters and the audiobook boasts an excellent narrator. The plot leads you along easily and the writing lends the air of a friend telling you the story.

I liked the, more than usual, complicated relationship dynamics. Mason and Annajane aren’t merely exes, but exes who work closely together. Not so unusual, you might be thinking. Well, let’s add in the fact that shortly, suspiciously shortly, after their divorce, Mason took sole custody of Sophie, his newborn daughter with an unnamed mother. The gossip around town speculates that Sophie’s mother and Mason had a one-night stand while he and Annajane were still married. Annajane knows that the timing is discomfortingly close to their divorce regardless, but to her surprise her bitterness melted away as soon as she met Sophie. She fell hard for the little girl and has played an active role in Sophie’s life ever since. That all said, I will admit that some of the twists at the end took the relationships from intriguingly complex to soap opera melodrama.

In my mind, there’s some hypocrisy going on with Quixie. That’s the soft drink company handed down in Mason’s family, the company where both he and Annajane work. While the book paints (with heavy handed strokes) Quixie as a wholesome family business, it’s ultimately a huge commercial enterprise that keeps their family stinking rich by selling people an unhealthy product. Wait, I’m not actually on a soapbox here. I just found myself rolling my eyes when Annajane goes on about the purity of the Quixie brand time and time again.

In general, though, this book doesn’t view things in the shades of grey I prefer but more in black and white. Take Mason’s fiancé and almost new wife Celia. As I see happen in many stories, Celia (the other woman figure) starts off as a nice if somewhat shallow person who’s simply not a good fit for Mason. However, her character descends into a mind-bogglingly deceptive and selfish woman. Personally, I enjoy the earlier incarnation of her character better. I think it makes a stronger statement when someone chooses between two people who could be good for him, rather than simply figures out which one is evil and which his soul-mate.

In many ways this sweet, simple story becomes a tale about pride, a tale about two people who could be great together if they can put the past behind them.
Posted by Rachel Hanley at 7:00 AM No comments:

A TALE OF HIGHLY UNUSUAL MAGIC 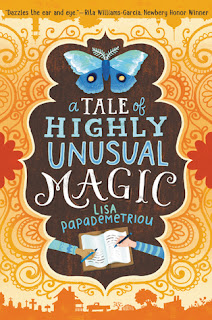 I have yet to read Stead’s now famous middle reader novel WHEN YOU REACH ME (or LIAR & SPY), but I understand from her most recent book GOODBYE STRANGER why she has such a devoted (and expanding) fan-base. She writes my favorite kind of stories, those rooted in character. She doesn’t hook with wild plotlines; the exact same tale would be yawn-worthy without characters who feel so real from the first page.

The book alternates between four perspectives: a trio of close middle school girls and a mysterious, unnamed high school girl. The trio consists of Bridge (short for Brigit), Tab (short for Tabitha), and Em (short for Emily), all starting seventh grade. Bridge survived being hit by a car in third grade, but lately she’s consumed by something a nurse said as she was recovering: “You must have been put on this earth for a reason, little girl, to have survived.” Tab falls in love (intellectually) with her new feminist teacher and all her ideals about civil disobedience. However, Tab’s still learning the line between parroting someone else’s values and defining your own. Em doesn’t look like the other seventh graders. She hit puberty early, in a major way, and even the older boys notice. One goes so far as to request a certain kind of photo. At first she knows better, but as they trade texts and she gets to know him she starts wondering what the big deal is with one little photo. Meanwhile, the high school girl’s story takes place all on one day, where everyone else’s stories eventually end. We don’t know who she is, only that she skipped school because she’s avoiding the consequences of a reckless mistake.

Every single character in this book - middle schooler, teen, parent, and teacher; girls and boys; lead, supporting, or peripheral character - feels tangibly real. The dialogue pops with authenticity, especially the voices of those straddling childhood and adulthood. Stead has a remarkable talent for bringing even the most mundane scenes to life with simple sincerity.

A lot of the insight (and you’ll find plenty) in this book almost feels like an inside joke. Stead sprinkles her story with the strange things we do in real life. Such as when Tab texts Bridge to call her, and Bridge does - but asks, exasperated, why text someone to call you rather than just call that someone? Much of the wisdom is new in phrasing rather than content. Such as Em’s mom’s explanation for how she and Em’s father can love each other for years and then file for divorce. Say people have 9,000 things, Em’s mom says. They meet someone and 1,000 of their things seem to match up, so they think they’re a great fit. Then over time they learn about more of each other’s things and some of them don’t align so well after all.

The ending satisfies, but frankly doesn’t feel like the highlight of the book. So many books drag in the middle, but this one soars in the middle while the ending feels more like a sad necessity. I do wish, however, that the book ended with the last chapter instead of the epilogue that doesn’t really focus on (at least what I perceived as) the heart of the novel.

After reading GOODBYE STRANGER I know I need to read Stead’s other books as soon as I can. Her character and relationship driven style plays right into my reading taste.
Posted by Rachel Hanley at 7:00 AM No comments: