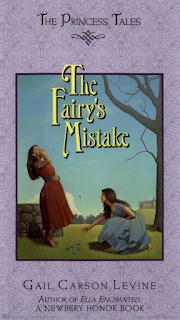 I adore Levine’s work. Known most for her first book ELLA ENCHANTED, Levine always hits that perfect balance between sweet and smart in her various fairy tale twists and retellings.

In THE FAIRY’S MISTAKE, a well-intentioned fairy stirs up trouble by not thinking through the consequences of her actions. She rewards a kind-hearted young girl with the gift of jewels tumbling from her mouth whenever she speaks and punishes the girl’s selfish sister with the curse of bugs and snakes emerging in a likewise fashion. Cruel fate, though, twists the reward to a punishment and the punishment to a reward. Rosella, the generous and compassionate jewel vomiter, doesn’t care that much for wealth...but everyone around her does. Not only does she find herself swarmed with false friends constantly urging her to talk on while they catch the precious stones falling from her lips, but this “reward” hurts. Rosella’s throat soon feels scraped raw from the jewels that manifest there every time she speaks and scratch their way up into her mouth to cut her gums and crack a tooth if she isn’t careful. Meanwhile, Rosella’s self-centered sister Myrtle learns to make spiders and vipers slithering from her mouth work to her advantage. No one else likes those things much either, so she holds the threat of speaking over people’s heads until they give her what she wants.

The story’s smart, the writing’s smart, and the characters are smart. Levine twists familiar tales in unexpected ways, fills the pages with amusing and witty quips, and crafts characters who can always think their way out of tough situations.

One can easily read these slim middle grade novels in one sitting. They’re timeless stories, too - great read-a-louds for younger children and still entirely enjoyable as an adult.
Posted by Rachel Hanley at 7:00 AM No comments:

Review of A FEAST FOR CROWS by GEORGE R.R. MARTIN
(fourth in the A SONG OF ICE AND FIRE series)

Same old, same old if you’ve read earlier books in this series - but if you loved them that’s not a bad thing. Betrayal, murder, rape, and on it goes. We meet new characters and lose even more, but the elements nevertheless start feeling very familiar. I kept a metal list of who I thought might die next - kind of an irresistible game with a book like this (and I couldn’t accurately predict anything; I have to give the author that).

I will mention that most people I know who lost interest in this series did so during this book, often before finishing it. I suspect perhaps due to what I mentioned above about same old, same old. That feels an odd statement regarding a story so layered and complex, packed with an abundance of vibrant characters, and overflowing with turnabouts and twists. However, sometimes stories with such wide scopes can feel less focused compared to simpler stories that connect with fewer or even a single character’s experience. A story about humanity overall can easily feel much less universal than a story about a single individual. It’s emotions we connect with and that’s hard if we don’t spend enough time bonding with single characters. Martin introduces quite a few new viewpoints in this installment. (Well, perhaps he has to after killing off so many previous viewpoint characters!) I grew increasingly interested in each as I kept reading, but at first it frustrated me opening the novel with brand new people I don’t yet care about when there are so many already established ones with unresolved storylines. There’s even a note at the end of the book explaining that this novel grew too long, so rather than divide it in half the author focuses on certain characters in A FEAST FOR CROWS and will focus on others during the same time period in the next book, A DANCE WITH DRAGONS. So be prepared to learn hardly anything new about some of your favorite characters in this installment.

I’m very hopeful that magic will start playing a greater role in the story. I’m often more interested in the fantasy elements than the court intrigue and war politics, but the book’s weighted significantly more towards the latter. However, the series has been steadily building towards a magic revitalization that never really comes. The next book is tilted A DANCE WITH DRAGONS, so I’m crossing my fingers that magic - or at least dragons! - will play a significant part.

This is an animated series with dynamic characters and countless interlaced plot threads. I adore the varied cast, though often wish I could focus closely on fewer characters for a deeper connection and understanding. I also find that, while I enjoy the storyline, it’s frequently buried beneath extraneous detail, especially regarding the setting and day to day life. I occasionally catch myself more skimming than carefully reading if pages upon pages focus on the scenery, clothes, food, etc. more than moving the story forward.

That said, the ending is a brilliant setup for the next book and I can’t wait to start it. Dragons, ho!
Posted by Rachel Hanley at 7:00 AM No comments:

Email ThisBlogThis!Share to TwitterShare to FacebookShare to Pinterest
Labels: A SONG OF ICE AND FIRE series, Fantasy, Reviews, Speculative Fiction 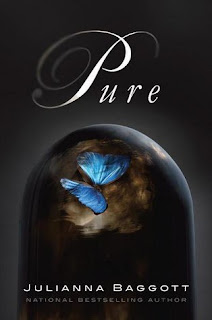 PURE begins with a haunting opening and leads the reader through a sickly wondrous world of unlikely misfortune and all too likely betrayal. This book intrigued me when I first received an ARC before its publication, but despite all the amazing feedback I heard about it, the novel still somehow became one of those that kept finding itself bumped aside for others.

PURE takes place in a post-apocalyptic world where worldwide bombings wiped out a significant portion of the population while mutilating those who survived. Anyone who did survive became fused to whatever they happened to be holding, touching, standing on, etc. at the time of the explosions. Our heroine has a doll in place of her hand. Her grandfather has a small fan in his throat. Another boy has birds on his back. Others are forever joined with another person while some even bonded with sand or other parts of the earth. However, some lucky people escaped both the horror of dying and the horror of surviving. Before the detonations, an isolated dome was built and a lucky few were hustled to safety at the last minute. Themes of class step forward from the subtext once the book touches on who made it into the dome and who didn’t.

Not that it makes any difference to my review, but for those wanting a label I would call this book soft sci-fi. It’s doubtless speculative fiction, but one could argue between fantasy and science fiction. Any technological speculative fiction lends itself to sci-fi, but I always distinguish between what I call hard sci-fi (that delves into almost believable nuts and bolts behind how real science backs up the improbable fiction) and soft sci-fi (that uses science as the explanation without really elaborating any further). Humans being fused to objects or other living things sound more like science fiction than fantasy, but a lot of details aren’t explained scientifically, such as how you can’t cut yourself away from whatever you’re bonded to without dying. Regardless of the label, it’s a great book, but I only mention this because I know many avid science fiction readers who feel frustrated when they pick up a soft sci-fi book that uses the speculative fiction premise as a catalyst for the characters but then doesn’t elucidate how the science works.

I loved this book, because I loved the characters, and quickly, too. The story primarily focuses on Pressia, the girl with the doll for a hand scrambling to survive in the wild wreck of humanity left behind after the detonations, and Partridge, the privileged son of a high power family in the Dome who suspects even his ideal sheltered life hides dangerous secrets he can’t ignore. An interesting side note, though: I’ve primarily seen PURE shelved with adult speculative fiction even though it stars young adult characters. As I discussed in this old blog post, the label Young Adult is far more about marketing than any one defining feature of the story. I can’t easily tell any particular reason PURE makes for better adult fiction than Young Adult except that the publicists no doubt thought it would sell better that way.

My only criticism is that I usually couldn’t picture whatever the author described, be that an action scene or a grotesque creature. The writing still conveyed emotions and impressions easily, so I didn’t feel particularly deprived by not being able to visualize everything - but for whatever reason the writing didn’t convey images to my mind so much as the abstract or emotional gist.

PURE may have been lost in a sea of post-apocalyptic novels around the time of its publication, but the intricate worldbuilding and likable characters make what initially feels like a routine premise suddenly delightfully unique. I certainly won’t wait so long to pick up the next book in the series.
Posted by Rachel Hanley at 7:00 AM 1 comment: