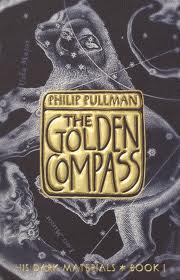 Review of THE GOLDEN COMPASS by PHILIP PULLMAN
(first in HIS DARK MATERIALS trilogy)
This is truly a work worthy of exuberant admiration. In HIS DARK MATERIALS, Pullman creates a vivid, detailed world with a grand, epic plot, complicated politics, and a varied assortment of memorable characters and relationships.
The book is fast-paced. Near the very start Lyra, our eleven-year-old protagonist, prevents an attempted murder and, through spying, learns of a mysterious substance called Dust, the mention of which seems to rile and rankle the adults around her. From there, it’s one climatic event after another as Lyra finds herself swept up in an intricate journey. She moves from one clear goal to the next, but throughout the book the sense builds that Lyra has a greater purpose, one she doesn’t know about yet and probably wouldn’t even understand if she did.
Let me backtrack and describe this world a little bit. Lyra lives at Jordan College in what seems an alternate universe to our own rather than a completely fictional construction. The geography is very similar, but history is quite different. What strikes me as the most obvious difference, however, is the dæmons. Every person is mystically linked to an animal, their dæmon, essentially a physical manifestation of their soul. Children’s dæmons can shapeshift into any creature, often symbolic of the human’s emotions, but during puberty the dæmon starts to remain in one form more than others until by adulthood it never changes from that form again. Do I need to mention the incredible metaphorical power of Pullman’s premise? And I’m only giving you a concise summary of an elaborate society. Pullman has carefully considered his imagined universe and understands how dæmons fit into this world. For example, when two people interact, so will their dæmons; however, the relationship between the latter is often all the more telling. Another intriguing fact is that humans, while they frequently touch their own dæmons, will never lay hands on another’s. As Lyra informs us, no one ever told her not to touch another person’s dæmon and yet she instinctually knows it’s forbidden, not by law but nature: it’s an unspoken rule.
Lyra is awesome. This story wouldn’t be half as incredible without her as the lead. She’s a spunky, fierce, brave, arrogant, funny, outspoken child who causes all kinds of mischief both mundane and heroic. Nor is she the only likable character. I personally adore books with a huge cast. I’ve met many people who don’t, because they say it becomes tricky to keep track of everyone, but I feel books overstuffed with characters both major and minor are far more realistic. Also, some authors (yes, Pullman) can pull it off and not once did I find myself mixing up characters or forgetting who someone was. Pullman shows us at least a little of everyone’s mind. Though there are lots of characters I adored, they never feel like cookie cutter heroes; each individual has their own morals, opinion, and vibrant personality. The villains are easy to pick out, but most of them believe they are doing right, not just for them but for the world.
You will find every kind of emotion you can imagine in these pages from Lyra’s comedic, childish tomfoolery to the complicated adult romances she can’t yet comprehend to tragic losses that strike the reader with real grief. I’ve said it before, but it bears repeating: this is a beautiful, allegorical story about growing up both as an individual and as one tiny part of a huge, complex world.
Posted by Rachel Hanley at 7:00 AM 4 comments: 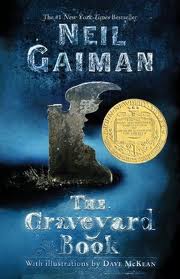 Review of THE GRAVEYARD BOOK by NEIL GAIMAN
An easy, quick read, THE GRAVEYARD BOOK possesses Gaiman’s distinct tone: deceptively formulaic enough to trick you into thinking you know what’s going to happen but then original enough to continually surprise you. In retrospect, the arch is clean and easy to map, but that doesn’t mean you see it coming when you’re reading. The book opens with a grisly start: a mysterious murderer dispatches an entire family…except the surprisingly competent baby who escapes to a nearby graveyard where the ghosts decide to raise and protect him.
From the very first scene, it’s clear that the story is building towards the principal confrontation at the end. That sometimes makes the rest of the book feel like filler until that moment, but Gaiman packs it full of enough interesting events along the way to distract the reader from the impending conflict. Also, the book has a very natural flow that tugs the reader along from one page until the next.
The writing takes a somewhat distanced approach to the characters, but I found myself nonetheless eagerly snatching up whatever small lines I could about each individual to piece together as much about them as possible. Sadly, the only one who didn’t win me over was Bod, our protagonist. His nickname is short for Nobody, what the ghosts named him once they decided to adopt him. It may very well be the author’s intent (and I’m still pondering Bod’s character), but sometimes Nobody did feel a little like a nobody. He has a few defining moments, but for the most part he feels underdeveloped and a little hollow. One might attribute his rather bland personality to the fact that he has been trapped in a graveyard all his life with mostly only dead company, but I would expect a mixed bag of ghosts from different centuries and backgrounds serving as family to make a person more interesting, not less.
This is a book that raises as many or more questions than it answers, but satisfies by covering all the major ones. Even if Nobody Owens didn’t captive me, his surrounding cast did and my mind toyed with the characters after the book ended, imagining what’s next for my favorites.
Posted by Rachel Hanley at 7:00 AM 3 comments: 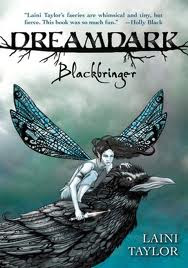 Review of DREAMDARK: BLACKBRINGER by LAINI TAYLOR
(first in the DREAMDARK series)
I want to start by describing Taylor's fairies and the words tiny, whimsical, and fierce immediately leap to mind. Now that could be because I'm subconsciously stealing from the quote on the cover by Holly Black: "Laini Taylor's faeries are whimsical and tiny, but fierce" or that those adjectives are simply spot-on. In some ways, these seem like your typical fairies. Typical might seem vague now that are so many stories about fairies of all types, but I'm referring to the small ones about the size of a palm that seem quaint by their size alone. However, there's an edge to Taylor's fairies. The one this story follows, named Magpie, spends her days hunting down demons.
I liked the magic system in this world, a funny combination of vague and specific that functions quite well. The role of humans also seems standard for a fey story. We're the foolish ones who keep screwing with the world's order in ways that we're too stupid to comprehend. In this case, a long time ago there was a great war between fairies and demons. For reasons that are explained later, it's always better to capture and imprison a demon than to kill it and so the fairies managed to lock away all the demons, mostly in ordinary bottles. An obvious Pandora's box metaphor, humans see a strange, corked bottle and they want to know what's inside. So the humans go around opening these bottles and releasing demons into the world while fairies like Magpie and her parents clean up the mess.
Most of the demons are crude, brutish things with more brawn than brain. As long as Magpie keeps clear of whatever fangs or claws each one possesses, she can usually dispatch them without too much difficulty. However, an even worse kind of demon has been released, one that Magpie's not sure she knows how to handle.

In earlier reviews, I've professed my adoration of all books by Laini Taylor and this one is no exception. The story held me beginning to end, and any loss or failure on the part of the characters struck me with a strong emotional "Nooo!" and sometimes even a desperate "Maybe if I go back and read it again, it won't happen that way this time!" Also, Magpie is a very relatable protagonist. She's a rare combination of youthful and wise, something that seems entirely believable for her character. She's probably a pre-teen by fairy standards, but given that they live much longer than us, you would expect a pre-teen fairy to have more life experience than a pre-teen human.

The writing flourishes with Taylor's distinct style and she builds a story with such natural ease that you can forget about the writer and immerse yourself in the world.
Posted by Rachel Hanley at 7:00 AM 2 comments: 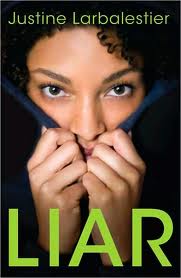 Review of LIAR by JUSTINE LARBALESTIER