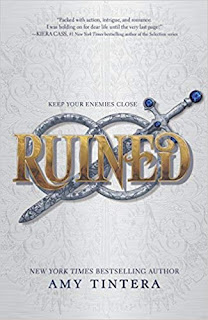 Review of RUINED by AMY TINTERA
(first in the RUINED trilogy)

Emelina Flores was the useless daughter of a powerful and ruthless queen. I don’t mean useless in the typical sense. I mean useless as in not a Ruined, this world’s term for those with formidable telekinetic abilities. Emelina’s parents and sister were notoriously remarkable Ruined. Until the day a rival kingdom organized an uprising, killing Emelina’s parents and kidnapping her sister.

They overlooked Emelina, the “useless” one. Mistake. Driven by a bitter craving for vengeance, Emelina has organized a return uprising. In fact, she intends to return every cruel favor by killing the entire royal family responsible for her own kingdom’s destruction. The book opens with Emelina murdering the young prince’s betrothed on her way to the castle. Emelina will take her place, marry the prince, and, once the pieces of her strategy align, she and the remaining Ruined will destroy an entire family and kingdom like they destroyed hers.

What Emelina didn’t see coming is how…reasonable the prince is. His father might be a cruel tyrant, but in the prince Emelina sees the potential for a different future. Of course, her vicious plan is too far gone to stop now, and she really can’t afford these developing feelings for a husband who won’t live much longer.

It’s no secret that YA fantasy has been a glutted market the past few years. You can read dozens of plot synopses that sound so similar, it’s difficult to select which books will make your cut. It comes down to quality, which you can’t assess for yourself until you read it, but for me RUINED stood out in the crowd. The book features a strong but flawed heroine, well-plotted politics, a convincing star-crossed romance, many other compelling characters, and satisfying social subtext. Simply put, this story has depth. How I love a good story with depth.

While a few details later in the book tied up a little too neatly, I felt invested enough in the characters that I eagerly suspended my disbelief and let myself enjoy the riveting story. The ending also hits that very satisfying balance between closure and plot threads left open for the next book. I can’t wait to read the second book in the trilogy and I’ve already looked into what else Tintera has written.