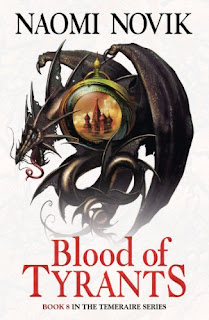 I adore the Temeraire series. Novik has mastered an utterly unique and appropriate authorial voice for her characters and setting and the dragons’ personalities and interactions never cease to amuse me. However, I will confess this installment is probably my least favorite of the series so far.

Our human hero Laurence finds himself stranded in Japan with amnesia. It’s the amnesia element that hurt the storyline so much, in my opinion. Personally, I rarely enjoy amnesia as a plot twist. It feels like any interesting development goes on pause while we the reader must wait for the character to play catch up: remembering everything that we already know…and the character knew, too, pages earlier. Only once the amnesia aspect is resolved does the story start to move forward again. It didn’t help that I happened to be reading three books at once that utilized this amnesia twist.

Of course, the primary tension in BLOOD OF TYRANTS comes from the fact that Laurence is separated from Temeraire and does not remember a thing about his beloved dragon companion. For all that Laurence can recall, he’s still in the navy. While this does indeed create some tension – Will Laurence remember Temeriare? What will happen when they’re reunited? – I found myself unable to invest in this storyline as much as with the other books.

I believe there’s only one book after this left in the series and, even if BLOOD OF TYRANTS wasn’t my favorite installment, I will be very sad when Temeraire and Laurence’s adventures reach their end.  I expect to remember stiff, formal Laurence and his articulate, well-mannered dragon for decades.
Posted by Rachel Hanley at 7:00 AM No comments: 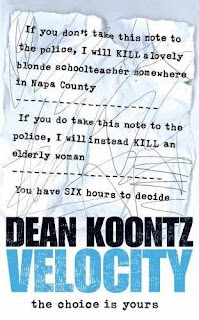 Review of VELOCITY by DEAN KOONTZ

This is a great book, but not really my taste. When I worked in a bookstore, I vastly broadened my horizons in terms of what I read. Before I more or less only read young adult fantasy, with some regular fantasy and mainstream fiction. Then my bookstore co-workers introduced me to mystery, romance, and numerous subsections of nonfiction. I would call VELOCITY horror, not normally my thing but I’ve learned not to let that stop me from trying something different here and there.

The story is too gratuitously violent and psychologically perverse for me, but I also think it’s exactly as one might expect for the genre and exactly what some readers are looking for. It’s certainly fast paced with dozens of extremely short chapters adding to the sense that the reader is speeding through this whirlwind story.

Aside from unexpected exceptions when plot summaries don’t encapsulate the full merit of a book, I think readers are good at sensing what they will enjoy. VELOCITY is well-written and dense with actions and twists. I expect that anyone intrigued by the above premise description will not be disappointed with the book. However, if it sounds too dark or violent for you, it probably is. When you try new things, not every thing is a winner and, though I commend VELOCITY as a well-written book, it also convinced me I won’t be an avid horror reader anytime soon.
Posted by Rachel Hanley at 7:00 AM No comments:

For those who follow my blog throughout the year, the books on this list won’t come as a surprise. I write long reviews, though, so below you can find much shorter descriptions of my favorite books from 2018. All the books I reviewed are linked to the original post.

Note that these are books I reviewed in 2018, not necessarily books published in 2018.

You could call this book a sweeping love story or an immigration saga; both are accurate. Ifemelu emigrated from Nigeria years ago, but a reconnection with her college sweetheart makes her reflect on her difficult immigration journey, and whether she’s where she wants to be now.

2.     THE TRUE CONFESSIONS OF CHARLOTTE DOYLE by AVI

Thirteen-year-old Charlotte has no idea what’s in store for her when she finds herself crossing the Atlantic Ocean without her expected companions. Though bred for a life of luxury and etiquette, she instead plunges into one of maritime adventure.

This second book in the imaginatively illustrated ABARAT series follows Candy on further bizarre adventures in this dreamlike world. Meanwhile, the nefarious Christopher Carrion hunts her, meaning the reader can expect a build towards a dramatic, epic showdown.

One of my all-time favorite authors delivers another gem with this fantasy series. The incubus Sebastian lives in a world made up of separate, magically linked “landscapes” that change depending on their inhabitants’ thoughts and emotions. When a dark force escapes its imprisonment, the horrific monster threatens this entire world with its unusual and twisted powers.

Though a skilled archer, teenage Ellie might have more than she can handle when she stumbles back into the past: specifically Sherwood Forest, unintentionally playing a Robin Hood role. This novel straddles the line between serious and silly, making this addition to time travel literature a fun and refreshing read.

This trilogy, wonderfully rooted in book magic, continues with this second installment. Though they conquered the horrific villain that Meggie’s father accidentally brought from a fantasy novel into the real world, Meggie longs to explore the novel’s magical world. Everyone warns her that the world of Inkheart is as terrible as it is beautiful, but Meggie might have to see for herself.

7.     THE OTHER BOLEYN GIRL by PHILIPPA GREGORY

Philippa Gregory remains my “measuring stick” for quality historical fiction. THE OTHER BOLEYN GIRL follows Mary Boleyn, the sister of Anne Boleyn as well as King Henry’s mistress before he set both Mary and Queen Katherine aside for Anne. Gregory will make you feel every page as both Mary and Anne scramble for their ideal lives in a society disinclined to care what women want.

8.     THE SWEETNESS OF TEARS by NAFISA HAJI

This family epic switches between character perspectives for each chapter to collectively portray a complex and affecting family history. Skillfully written and expertly plotted, this novel impressed me on both micro and macro levels.

This silly, amusing chick lit novel starts with the heroine unintentionally spilling her every secret, big and small, to her new boss: work secrets, family secrets, boyfriend secrets. Once she realizes what she’s done, cue embarrassment and awkward encounters.

10.  IN THE GARDEN OF BEASTS by ERIK LARSON

This nonfiction history book follows the American ambassador in Germany before World War II: William E. Dodd. An unusual man for both his time and ours, Dodd believed politicians should focus more on affecting positive change and less on monetary rewards for mediocre work. Unfortunately, his perceived eccentric views led many to dismiss his warnings about Hitler.

Veteran literary agent Donald Maass delivers a unique and helpful writing guide that merges the actual craft of writing with the business of writing what sells. By framing discussions around stakes, characters, and conflicts, Maass addresses what works well in stories and what makes us readers invest. Even with familiar advice, Maass finds his own unique and refreshing phrasing.

12.  THE HUSBAND’S SECRET by LIANE MORIARTY

When a wife finds a sealed envelope addressed to her in her husband’s handwriting, she innocently mentions it to him. He begs her not to read the letter, to dispose of it and forget she ever found it. With her knack for exemplary characterization, Moriarty explores how far we can extend trust, and what happens when it’s broken.

The second book in Nix’s one-of-a-kind ABHORSEN series follows new characters: Lirael, who lives among prophets but never seems to come into her own powers, and Sam, son of Sabriel and Touchstone and the reluctant abhorsen-in-waiting. When a powerful entity starts gaining followers, these two unlikely heroes find themselves taking charge in unexpected ways.

14.  TONGUES OF SERPENTS and CRUCIBLE OF GOLD by NAOMI NOVIK

This unique historical fantasy series, set during the Napoleonic Wars, imagines an additional branch of the military devoted to dragons and their riders. TONGUES OF SERPENTS sees a disgraced Laurence sent to Australia with his dragon Temeraire, where they encounter a dangerous new creature. Then CRUCIBLE OF GOLD introduces the pair to the powerful Incas, who could greatly sway the course of the war depending on whether they align themselves with Napoleon or against him.

15.  TELL US SOMETHING TRUE by DANA REINHARDT

River lives for his incredible girlfriend Penny, so when she dumps him he sincerely believes his life is over. Then he meanders into a support group for teens with addiction where he expresses his Penny withdrawal by substituting “girlfriend” for “marijuana.” Over the course of an expected but nevertheless satisfying internal journey, River recognizes the far greater hurdles that others overcome and that his life is far from over.

This nonfiction collection features dozens of remarkable tales about real women from history who defied social norms and expectations. While not all make for ideal role models, these woman are certainly all memorable.

The second book in this trilogy finds Yelena reunited with her long-lost family and struggling to master her magic. Then she becomes the best hope for stopping a predatory kidnapper, but she’s far from ready. Her adventures conclude with the third and final book FIRE STUDY.

In this creepy, gorgeously-written magical realism tale, Jean-Baptiste has an almost supernatural affinity for smell. Not only can he separate out individual scents and track them, but he lives for the eventual goal of discovering a method of bottling and preserving the perfect smell.

19.  THE SERPENT KING by JEFF ZENTNER

If I had to pick only one favorite book of the year, this would be it. This young adult novel follows the friendship of three unique misfits in a small town. Believe me, the description does not do justice to this story’s stellar quality. Read it.