THE PRINCESS AND THE HOUND 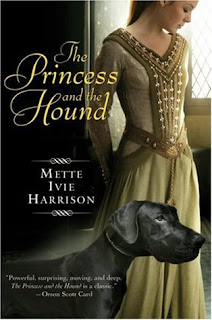 As a dog fanatic, I’m a sucker for books that feature dogs at all, especially at the core of the story. THE PRINCESS AND THE HOUND reads like a fresh fairy tale, striking that wonderful balance between nostalgic, familiar elements and unique, innovative twists.

This story is difficult to describe without revealing too much; I wouldn’t want to deny anyone the chance to read how this tale unfolds for herself. Let me say that the characters really made this novel exceptional for me. Everyone feels layered and believable, rather than typical, simple fairy tale tropes. The prince is likeable but tortured with self-doubt and the princess standoffish and odd but all the more compelling for it.

They live in a world with animal magic, but – fearful of its power – people now hunt down and kill anyone believed to possess it. Prince George’s stomach turns at enforcing such laws, for both personal and moral reasons, but he doesn’t know how one changes the minds of an entire kingdom. Meanwhile, Princess Beatrice’s moods could be explained by the sad fact that her father treats her like a useless disappointment – but there’s still more to her mystery.

Harrison deftly interweaves several plot threads, in ways you might not expect. This book frequently intrigued, surprised, and moved me, earning a fond place in my heart as a favorite, a beautiful modern classic.