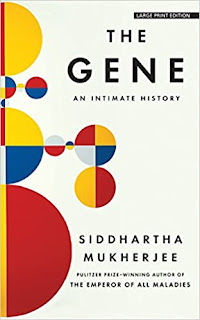 Review of THE GENE: AN INTIMATE HISTORY by SIDDHARTHA MUKHERJEE

This author is already well-known for his bestseller THE EMPEROR OF ALL MALADIES, which—coming highly recommended—is on my to-read radar but hasn’t made the cut off the too-many-books-too-little-time list. However, when a friend I was visiting bought Mukherjee’s more recent book and I expressed interest, she dared me to read it in the less than 48 hours remaining in my stay. At 495 small-print pages, it was a tight squeeze, but I finished it!

Of course, it helped that THE GENE is an engrossing, well-written book. The difficulty with nonfiction can be making material that is normally very interest-specific more universally appealing. Mukherjee exemplifies the best of this art, crafting a story of “the gene” that reads like an epic tale. He begins around Aristotle’s conviction that not all traits come from the male. From there we explore: Mendel, Darwin, eugenics, and more – on into the modern era’s current research and technology. He even makes the material more personal by sharing about his family’s genetic history with schizophrenia.

At times we veer away from the science into the politics behind the research: government and societal influence, relationship dynamics between scientists, various bias. This all helps develop a complex, layered portrait of both the science and the history behind “the gene.”

It was probably more noticeable because I read this book in two days, but Mukherjee does repeat some information along the way. It’s always spaced far apart, so I assume it’s intended as refreshers and likely especially helpful for the more probable scenario where someone makes their way slowly through this book one chapter a week or so.

I haven’t yet read the popular THE EMPEROR OF ALL MALADIES, but after finishing THE GENE, I understand Mukherjee’s appeal as a writer. He’s a veritable storyteller of history.