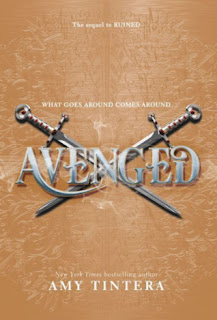 Review of AVENGED by AMY TINTERA
(second in the RUINED trilogy)

Don’t read this review if you don’t want any spoilers for the first book in this trilogy, RUINED

The conclusion of RUINED left a complicated, intriguing setup for the this book. All Em wanted was to rescue her sister Olivia and she finally accomplished that. While Olivia’s taste for cruel vengeance does give Em misgivings, most readers will likely be even more alert than our heroine to the possibility for tragic disaster. Though Olivia has always had a vicious streak, Cas has opened Em’s eyes to how power can be abused, all too easily. Now, to boot, Olivia has good reason for craving revenge. It’s clear Em can expect a struggle keeping her powerful sister in line.

Em and Cas went their separate ways at the end of the last book, each turning their full attention to repairing their fractured countries. Cas’s power-hungry cousin Jovita clearly aspires to oust him from his leadership role, and his well-known romance with Em, a perceived enemy to their country, gives Jovita a perfect opportunity for discrediting him. Meanwhile, Em and Olivia no longer have a castle and many of their people, the feared Ruined, have already been murdered, but they intend to rebuild. Of course, Olivia wants more than that; she wants revenge and she wants to remind everyone why Ruined like herself should be feared, respected, and above all obeyed. Em softens Olivia’s cruelty, but Olivia increasingly resents her sister’s pleas for mercy, compassion, and compromise.

Though fate tore Em and Cas apart, Tintera manages to unite and divide them repeatedly in this second book. While the likelihood of their crossing paths requires either significant suspension of disbelief or faith in concepts like fate, I happily went along with anything that seemed a little contrived; the characters and their relationships make the story well worth the reader’s cooperation.

In AVENGED, Tintera spins a vibrant, complex tale of war, intrigue, and alliances. Even when the author hand feels heavy, the pay-off is worth it in the form of a compelling and satisfying story. I look forward to seeing how Tintera concludes this trilogy.