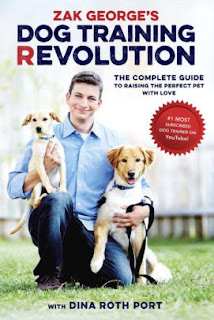 I hadn’t heard of Zak George before borrowing this book from the library. (I’m now given to understand he’s a popular YouTube star, with his videos focusing on dog training.) I’m reading several books on raising and training dogs, as I plan to adopt my own soon. While I’m an experienced trainer myself, I treat dog ownership as a sacred responsibility and am doing all the brushing up I can.

Though I may not have heard of him, I love George’s training approach, and thus loved his book, too. He and I are of the same mind regarding dog training, specifically that we emphasize positive training. While methods have been steadily moving towards that direction, years back when I was actually working as a dog trainer my positive approach was very “against the stream.” The idea behind positive training is that a dog is a companion, so you want to build a strong bond of trust and understanding, with which you can teach your expectations. By contrast, there’s dominance theory, which is increasingly—thankfully, in my opinion—falling out of fashion. As George discusses, dominance theory is based on misinformation about wolf pack behavior and the misguided notion that dogs, domesticated millennia ago, are the same as wild wolves. Dominance theory pushes concepts like alpha and submission, and focuses more on punishment and control, which—most reputable trainers will tell you—actually only creates more behavioral issues.

I particularly love that George encourages speaking to your dog in full sentences. They understand more than most owners realize. And, no, encouraging these conversations isn’t an insistence that dogs entirely follow every word of your meaning, but they do recognize trends. George even suggests saying, “I’m going to show you something new today,” every time you introduce a new command or trick. Sure, the dog won’t have a clue what that means the first time you say it, but they are smart enough to notice the pattern that whenever you say that, you then teach them something new right after. Anyone whose dog runs for cover at the word “vet,” no matter how the word’s buried in a sentence, knows how much connection dogs can make between certain words and certain situations.

While George’s book is much slimmer than most of the other dog guides I’ve read, frankly I thought his was packed with the most useful information. He demonstrates that you don’t need to be long-winded to teach dog training and he condenses clear instructions for teaching specific common commands and behaviors within a few paragraphs or less each.

I agree so strongly with George’s advice; I found this a refreshing and validating read, especially given how many dominance theory books have been around for decades. Let the dog training revolution continue!
Posted by Rachel Hanley at 7:00 AM No comments: 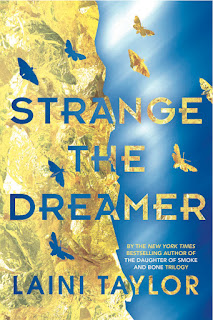 Review of STRANGE THE DREAMER by LAINI TAYLOR

After her bestselling DAUGHTER OF SMOKE & BONE trilogy, Taylor returns with another unique and haunting tale. Orphaned librarian Lazlo has been obsessed with the mythical and mysterious city of Weep for as long as he can remember. Then a hero known as the Godslayer walks into their library seeking help on behalf of the, apparently, very real city of Weep.

Taylor has a knack for luscious writing and addictively intricate and complex plots. My above summary of the premise hardly does justice to the layers of absorbing characters and conflicts. Toss in a rivalry with a vain alchemist, a forbidden romance, a high-stakes “riddle,” and an intriguing magic system. As for the writing, take the following phrase for example of Taylor’s distinct style: “his voice low and masculine...as though it had been left out in the weather.” She writes unique metaphors I have never heard, would not have imagined myself, and yet easily understand.

I honestly loved this book, but I don’t think I’ll read on this series. Without specific spoilers, the ending skewed away from my tastes. The whole book feels like the opening scene of a greater story, and the dramatic cliffhanger ending lost rather than peaked my interest. Taylor used to be one of my favorite authors, but she’s increasingly moving away from what I love about her work—the whimsy, writing, and humor—and towards what I least like—grimness and drama. I’m of the mind that dark content is about balance: what it adds to the story must be worth the level of horror/trauma/tragedy. For me, this book felt like it gleefully marinated in overdone darkness. However, if you love drama so juicy it’s like water wrung from a cloth, including complicated character dynamics, haunting magic, and plenty of tragedy, this book is absolutely for you.