THE MIRACLE OF MINDFULNESS 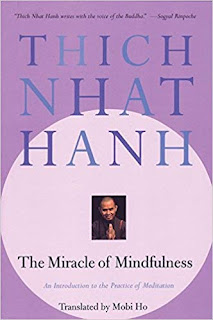 Review of THE MIRACLE OF MINDFULNESS: AN INTRODUCTION TO THE PRACTICE OF MEDITATION by THICH NHAT HANH
(translated by MOBI HO)

I waffled on whether or not to review this book, because it reads so spiritual that reducing it to a review feels somewhat sacrilegious. That disclaimer aside, while mindfulness and Buddhism are higher concepts, books are still products. A book is not special simply for being about mindfulness; a good book requires more from the author than topic selection.

THE MIRACLE OF MINDFULNESS is an excellent-ish starting place for someone new to mindfulness. I add “ish,” because the tone is definitely that of someone immersed in the concept for years, and some of the techniques, such as specific meditation approaches, strike me as closer to the deep end than a true beginner might want. However, this book is a slim, easy read that introduces mindfulness staples.

As someone already actively exploring and practicing mindfulness, a lot of this content was familiar. Perhaps more than anything else, what appeals to me about mindfulness the most (as well as what I struggle with the most) is living in the moment. That very phase “living in the moment” has become such a cliché that, for me at least, it’s lost its meaning and wisdom. However, broken down I find the concept life-changing. THE MIRACLE OF MINDFULNESS encourages approaching “being present in the moment” with simple tasks like dish washing.

Myself, I first encountered mindfulness in terms of mindful eating. Slow and savor are key elements. Focus on your food. Do not eat with the TV on or (be ready to gasp, readers) a book in your hand. Pay close attention to your senses: look, smell, taste, touch. Anecdotal and scientific research alike suggest mindless eating, caused by our busy lives, plays a major role in weight struggles. I also promptly realized that slowing down and really paying attention to the current moment was a skill useful in far more than developing healthy eating habits.

As someone raised among scientists, I scoffed a little at mindfulness at first. The self-compassionate, supportive lingo struck my ear as cheesy and trite. However, as I’ve opened myself up to mindfulness and actually given the techniques a try, I feel more and more besotted with the mindset. Increasingly, I tell people that mindfulness is my religion. For anyone unfamiliar with exactly what mindfulness is, THE MIRACLE OF MINDFULNESS is a good place to start.

Posted by Rachel Hanley at 7:00 AM