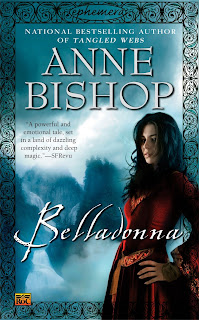 Review of BELLADONNA by ANNE BISHOP
(second in the EPHEMERA series)

I love Anne Bishop. One of my all-time favorite authors.

I’m afraid I don’t have a lot to add for my review of BELLADONNA that I didn’t already say with SEBASTIAN, the first book in this series. BELLADONNA reads like more of the same, in the best possible way.

But to make a little effort (and not set a record for shortest, least helpful review), BELLADONNA focuses on said title character’s preparations for the final showdown with the Eater of the World. The book also introduces a new character, Michael, whose admirable powers are feared rather than appreciated in his landscape. Fate brings him to Belladonna, but fate may also tear them back away from each other.

Aforementioned final showdown will likely feel familiar to readers of Bishop’s BLACK JEWELS series. As I’ve claimed before, Bishop follows a definite formula: one all her own, thoroughly satisfying, and always fleshed out with intriguing characters and magic system details. However, it’s easy to draw numerous parallels between the heroines, the villains, and the sacrifice said heroines make to defeat said villains. In BELLADONNA, I particularly liked the details about how this specific sacrifice affects the Eater of the World, more nuanced than simple destruction.

Everything I read by Anne Bishop, BELLADONNA included, ranks among my favorites. I would recommend her work to everyone, although more realistically to those whose tastes align with the following three descriptors: dark fantasy romance.