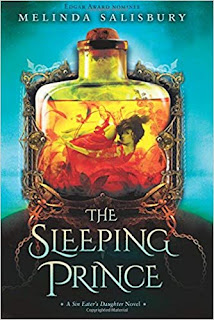 This trilogy started very well with THE SIN EATER’S DAUGHTER and I was excited to read the next book. Initially, I was disappointed that THE SLEEPING PRINCE opens in a new perspective, especially since the first novel ended on a slight cliffhanger. However, our new heroine Errin won me over as much as Twylla, arguably more so for being a little more relatable. (No poison skin or anything like that.)

Errin does connect to the first book. She is Leif’s sister. Leif left Errin and their mother for his job as a royal guard in a foreign country, supposedly to help his family financially, but Errin has not been feeling particularly helped. Whether his heart was in the right place or not, Errin’s brother abandoned her to handle both money issues and a mother with severe mental health problems. Now that The Sleeping Prince has awoken and is sweeping through every country, killing by the hundreds, Errin will need to figure out how to move her unpredictable mother away from their dangerous position on the border.

Errin is not entirely without help. She befriended a peculiar outlier named Silas. He wears a hood at all times and Errin has never seen his face. Their friendship is rocky; they clearly like each other, maybe more than like, but both have secrets from the other and a lot to lose if they misplace their trust. Despite all that, Silas is all Errin has right now.

I found Errin’s dream sequences odd and irrelevant, but—as with opening on a new character—trust the author. Salisbury knows what she’s doing, and by the end of the book any confusion or criticism I had smoothed out and made sense to me.

THE SLEEPING PRINCE builds to a powerful, unexpected, emotional (but, yes, cliffhanger) ending that left me desperate to start the next book immediately.