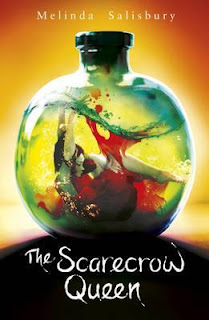 My adoration of this series grew exponentially with each book. This concluding novel broke my heart, but also amazed me for it for its capacity to affect my emotions. I adored this series and would highly recommend it to anyone looking for a YA fantasy trilogy that stands out in the crowd.

First, let me warn that this review contains some spoilers for the first two books.

THE SCARECROW QUEEN opens with all of our main characters in precarious positions and the author isn’t any kinder to them throughout the book. Errin is being held prisoner by Aurek, as Leif secured her safety (or rather her life more than her well-being) by promising her hand in marriage to the Sleeping Prince. However, Aurek is beyond understanding any kind of love or affection (total psychopath) and really sees Errin as little more than an interesting toy. Which means disposable if no longer pleasing. Meanwhile, Twylla flees for her life, well aware that she might be the best and only shot for destroying Aurek. With this in mind, she tries to launch a rebellion, a seemingly impossible undertaking.

I have entirely mixed feelings about Leif’s role in this story, but cannot deny that Salisbury made me FEEL and feel intensely. His character isn’t at all who I thought him to be, and at times I felt frustrated by that, but on the other hand he’s not at all who Twylla thought him to be and I related so strongly with how she must feel about that. Unfortunately, Leif’s complicated character overshadowed the rest of the story for me. I skimmed a lot, hoping for more satisfying explanations regarding his motivations.

The book didn’t provide nearly as much closure as I wanted, and I both love and hate it for that. The hate part is more obvious; I feel tortured by the unanswered questions the author has left me to brood over. As for the love part, I also feel the open-ended nature taps into a genuine aspect of real life; sometimes we don’t ever get to understand why that person did what they did. Also, regardless of any yearning for anything more, I am impressed at how strongly Salisbury made me feel. There are several standout, dramatic scenes in this novel that I not only pictured so clearly as I read them, but continue to play over in my mind.
Posted by Rachel Hanley at 7:00 AM