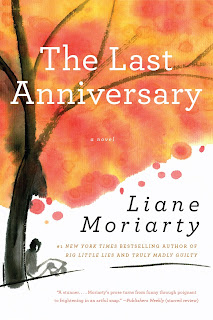 Review of THE LAST ANNIVERSARY by LIANE MORIARTY

First let me say that I liked this book. I like (often love, sometimes adore) all of Moriarty’s work. However, interestingly enough THE LAST ANNIVERSARY is both my least favorite so far as well as the one that best handled my pet peeve about her writing.

That pet peeve is that she always plants a piece of mystery bait early in the story to keep the reader hooked out of a desire for answers. I find this tension technique overdone and unnecessary, especially in Moriarty’s case since she writes such strong and intriguing characters. The withheld mystery in THE LAST ANNIVERSARY is regarding a local legend. A baby was discovered abandoned, the parents mysteriously gone with no explanation. However, it’s clear from an opening chapter that at least some people know the true story behind this mystery and, as is standard for a Moriarty novel, those secrets will not be revealed until the dramatic ending.

The withheld mystery didn’t bother me as much in this novel as it has in others, I suspect because Sophie doesn’t know either. While the book dips into other perspectives, I viewed Sophie as our protagonist and felt comfortable watching secrets unfold along with her. I think it frustrates me more when a character already knows something, but only ever thinks about it with vague, veiled wording meant to intrigue without explaining. Or even when someone else knows, but all it would take is simply asking them.

Moving away from my pet peeve point, though, what I adore about Moriarty’s writing is the nuanced characters and how all the relationships pop with believable chemistry. Yet I experienced that the least in this book so far. The characters felt a little flatter, less developed. I didn’t buy them as people I might meet, like I normally do with her characters. I struggled keeping track of everyone, as well as their relations to each other.

Having established that this one is opposite to my usual Mortiarty impressions, let me back up and explain the premise a bit more. Sophie is single when her one-that-got-away, and now married, ex approaches her with a bizarre situation. His aunt has passed away…and left her house to Sophie, much to the fury of other family members. Sophie loved that house, probably part of why the aunt left it to her. It’s on a small island infamous for the unsolved mystery. Generations back, the aunt’s family found that abandoned baby in a house they rented, with absolutely no sign of what happened to the parents.

Aside from the underdeveloped characters, I do have a few more criticisms with this one than I normally do with this author. I’m afraid I called almost every single twist in the entire book, including the main one about the original Munro Baby mystery. My frustration over this is lessened by the fact that there was one small twist near the end that I didn’t see coming and I was pleased to be taken by surprise by that one.

Unfortunately, I will also say that the final explanation for the big Munro Baby mystery didn’t fully satisfy me. I have to suspend my disbelief far too much to be convinced, especially in proportion to how long that information is dramatically withheld. The explanation seems to rest entirely on the incompetency of others.

Honestly, I think this is fantastic book that fell a little short of the high bar I set for Moriarty’s work. The short chapters make it a fast read, and, as ever, Moriarty infuses everything with suspense and complicated relationships.
Posted by Rachel Hanley at 7:00 AM