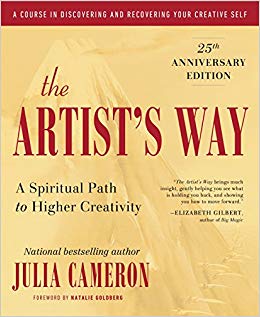 Review of THE ARTIST’S WAY by JULIA CAMERON

Lately, I’ve read several books about writing, including many classics such as this one. As soon as I began reading THE ARTIST’S WAY, it became apparent that it’s different than its peers. For anyone unware, THE ARTIST’S WAY is less a collection of advice and thoughts about writing as it is a more structured, reader-participation-required 12-week program. The idea behind the program is that many of us are “blocked” creatively. This doesn’t refer only to writers, or professional creatives. Cameron makes the very valid point that our society tends to project a message that one either is or isn’t a creative person. She argues that everyone is creative, but some have “blocked” this impulse, because of negative feedback. The idea behind this program is to explore those demons, work through our blocks, and release our natural creativity.

So as for my bias, I am not a particularly spiritual person, but I have lately been coming around to all the benefits spirituality, especially mindfulness, has to offer. On a superficial level, this book seems cheesy to me. There are a lot of invented terms to summarize complex ideas as well as corny statements that have me fighting an eye roll impulse. I’m very intrigued by psychology, but this reads like pseudo-psychology: insightful observations of the human condition delivered in layman, fanciful vocabulary rather than accurate psychological terms. While wise, some statements still irk me by neglecting relevant research and treating the human mind more like magic than science.

That said, I do find Cameron’s take on creativity very insightful. And, as my years of reviews demonstrate, I’m a big believer in being a critical thinker, a critical reader. Some people act like you either like a book or you don’t, but I prefer to break books down into their parts and discuss both what I loved and what didn’t work for me. Anyway, my longwinded point is that I suspected, if I could set aside my cynicism, I could gain something from doing this program.

It’s worth mentioning that I never considered myself blocked, which means I’m not exactly Cameron’s target audience. Nevertheless, I related to her introductory claim that we all have untapped creativity that we ignore for all the wrong reasons. I wanted to give her program a sincere effort, but I went into it skeptical that I would gain anything.

Boy, was I wrong. To boil the program down to an overly simplistic summary, at the core of all twelve weeks of reading and various exercises Cameron has you consider, again and again and from numerous different angles: what you wish you were doing, why you’re not doing it, and whether that why is truly valid. It didn’t take long for me to discover that I was blocked in ways I didn’t expect. I think of myself as a writer. I am comfortable claiming that identity and I write regularly without allowing any doubts or insecurities to slow me down. I didn’t expect this program to help much with my writing, and I was correct. (Okay, correct-ish.) What I didn’t realize is how many other creative pursuits I have given up, for all the wrong reasons. You know, the wrong reasons Cameron cites. For one example, I used to paint and sketch. Then pursuing writing professionally made me turn my critical, editorial eye to my artwork. My art is underwhelmingly decent in technical skill and pretty unremarkable in terms of innovation. While I think (and hope) my books might earn me money one day, I never expect my sketches or paintings to do so. Despite that, I still love painting and sketching. I find the process meditatively soothing and I experience a sense of pride for the end result regardless of how it might rank on some grander scale. I also love surrounding myself by my own artwork; instead of some stranger’s painting on my wall, I can look up and think, “I did that.” This program made me realize I stopped doing something that brings me happiness simply because I didn’t think I was good enough to justify the time commitment or expense of materials. Now I’m painting and sketching again, after almost a decade away from those activities, and thrilled to be reunited with those hobbies.

Aside from specific activities that I’m now doing but I wasn’t before I started the program (and I could list many more), THE ARTIST’S WAY has helped my developing interest in mindfulness and finding balance. We all know the world bombards us with cruel and inaccurate messages, but sorting them is easier said than done. This program teaches invaluable emotional tools for self-therapy, self-assessment, self-care, and self-compassion. I was writing plenty before this program, but I feel emotionally healthier about my writing (and everything else) now. Happier. More relaxed. Cameron definitely helped me root out some of my “negative core beliefs” and replace them with more positive affirmations.

I will also mention that when I was waffling on whether or not to try the program, a friend offered to do it with me. I would really encourage this to anyone already a little skeptical. My friend and I are both people who believe when you open yourself up to new experiences, you can gain something, even if not everything promised. While I would indeed rave about this book and program now, there are still plenty of small specifics that I found cheesy, trite, or pointless. I enjoyed having a friend with whom to compare reactions to said specifics. Especially because it demonstrated how much everyone brings their unique perspective to everything they do. Even though we both started the program hesitant about learning anything, we often differed on exactly what we found astute versus silly. It all had to do with what struck a chord with our own distinct experiences.

If you’re a scientific-minded person like myself, you’ll likely balk at some of the invented, sentimental lingo Cameron uses, but I would nevertheless urge anyone interested to give this program a sincere try. (Sometimes with syrupy words,) Cameron presents a genuinely helpful and insightful perspective on creativity and pursing what makes us happy.

As this book isn’t “like the others,” this review won’t be like my others. Since THE ARTIST’S WAY introduces a 12-week creativity program, I intend to follow this review with a post for each week of the program. (Note: I’ve already completed the program, and the posts will be staggered with my other reviews, not one every week, so this isn’t a “live” posting series.) In addition to a friend offering to join me, another thing that convinced me to try the program was reading other such blog posts. Cameron originally designed her program as a class, and when she realized how effective her students found it she published the program in book form to share with more people. However, I do see the benefit of going through the experience with others. If you don't have that option, blogs can help you feel more connected to different perspectives.

In summary, I would describe THE ARTIST’S WAY as guided self-therapy focused on creativity. Cameron provides the tools, but you do the work; you will get out of it what you put into it. Be prepared for plenty of self-reflection and surprising insights.