THE TRUE CONFESSIONS OF CHARLOTTE DOYLE 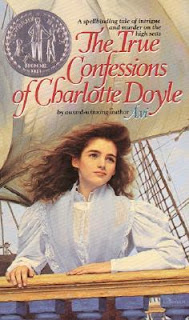 Review of THE TRUE CONFESSIONS OF CHARLOTTE DOYLE by AVI

I last read this book back in sixth grade and remember my mind boggling at everything Charlotte experiences. I consider this one of my formative feminist reads as I remember having thoughts like, “A girl can do that? A girl can have adventures like that?” To my sixth grade brain, this was a boy adventure book featuring a girl, and that was both revolutionary and worthy of my complete adoration. I’m pleased to say that the book holds up on a re-read in later life, though my enthusiasm is mildly tampered only by having much more life experience now. This may have been one of my first feminist reads after all, but it was certainly not the last.

Set in 1832, the story follows thirteen-year-old Charlotte, sent to meet her parents across the Atlantic Ocean via ship. It was expected she would have companions her own age and station, but due to unforeseen circumstances she winds up travelling alone. Luckily, the charming captain promptly befriends her and promises to look out not only for her safety but also her comfort during this rigorous journey. So you can imagine Charlotte’s confusion when one of the crew starts warning her against the captain and then her further alarm at hearing whispers about mutiny.

The book is much shorter than I remember, but then again I did read it when I was younger. Then and now, it amazes me how much is packed into such a small book. At times, the older me did want more development, of the characters, the relationships, but I also recognize the book is probably perfect as is for the middle reader target audience.

I’m a bit nervous about re-reading old favorites, concerned I might actually dislike books I adored and considered formative. THE TRUE CONFESSIONS OF CHARLOTTE DOYLE holds up as worthy of the high place it held in my memory for so long.
Posted by Rachel Hanley at 7:00 AM